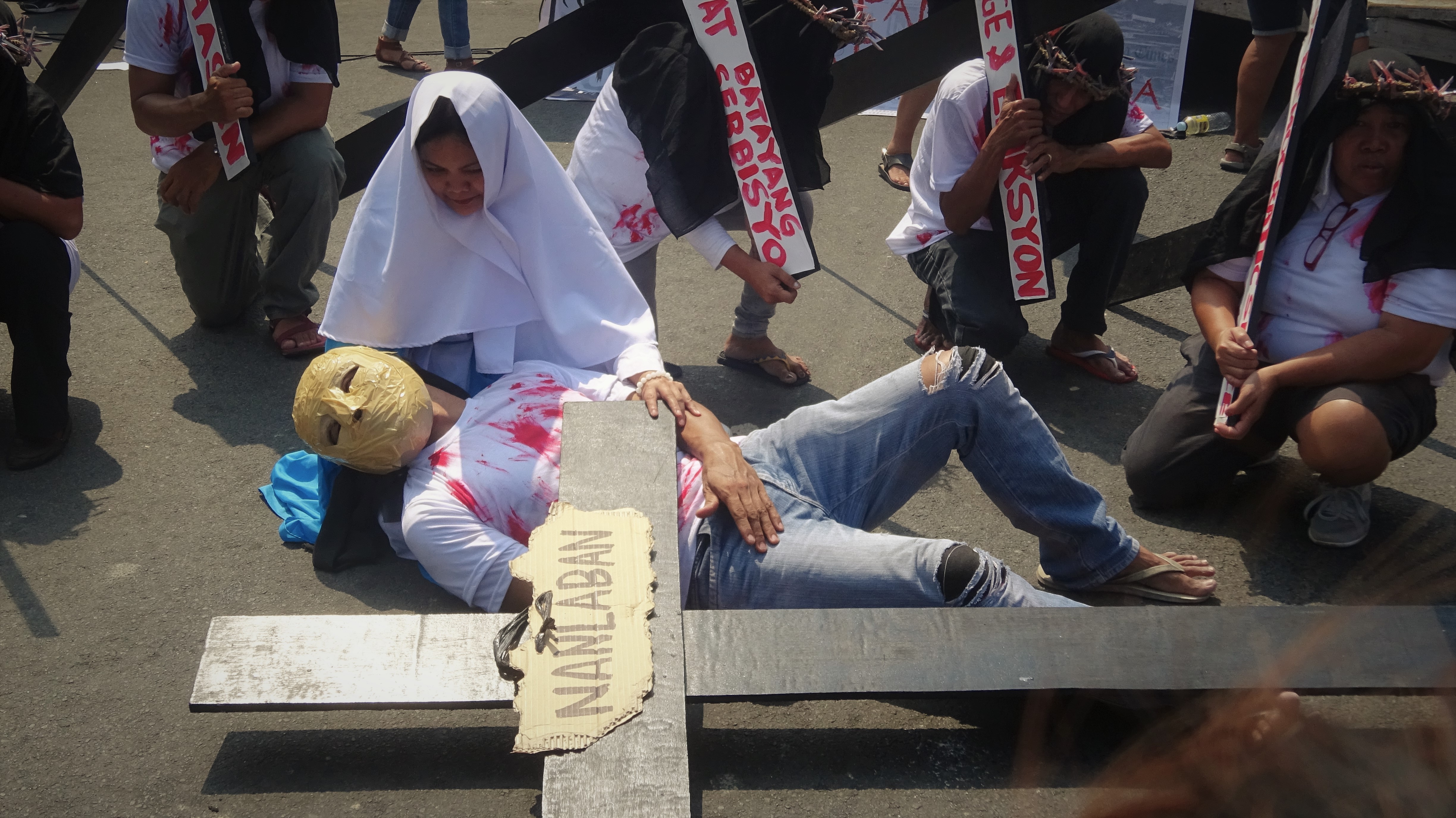 They lamented the seemingly endless suffering of the poor because of the following: (1) extra judicial killings and the reinstatement of the death penalty, (2) lowering of the minimum age of criminal responsibility, (3) inadequate provision of housing and basic services, (4) proliferation of fake news, (5) climate change and evictions, (6) culture of fear and lack of respect for women, and (7) decreasing space for the free and critical participation of the citizenry. Poor people, the groups said, bear the brunt of these issues, especially the brutal “war on drugs”, which has unfairly targeted drug users and pushers, alleged or otherwise, in poor communities. The kalbaryo concluded with the celebration of the Holy Mass led by Manila Auxiliary Bishop Broderick Pabillo and Fr. Robert Reyes. Below is the statement of the issues in English and Filipino:

2017 Calvary of the Urban Poor
Statement of the Issues

First issue: Extra Judicial Killings and the Death Penalty.  The culture of killing dominates our society today. Because of the government’s war against drugs, the flow of blood continues in our communities where the number of EJK cases is rising. People’s lives are being sacrificed in our country allegedly in the name of peace and order.  Despite thousands of EJK victims, how many investigations have been carried out and how many victims have been given justice? As for the return of the death penalty, it is the urban poor as usual who will suffer. Because the poor in prison are not able to hire a good lawyer to defend them, it is again the poor who will be victimized. We are against drugs and condemn those who commit illegal acts. But suppressing them, especially for us poor, will not happen simply by killing them.  We are after all also people with dignity, Filipinos who have human rights under the rule of law, including rights to life.    Stop the killings! Eliminate the death penalty!

Second issue:  Lowering of the Age of Criminal Responsibility. If the Bill to lower the minimum age of criminal responsibility of Filipinos is passed into law, then our children as young as nine years can be considered criminals. Thus, instead of helping the children and their parents to correct their mistakes, however serious these may be, our legislators are choosing cruel measures to inflict on still immature young children and eliminate any chance of as better future for them. Our leaders prefer to put them in jail and label them as criminals, a stain that will hang over them for the rest of their lives. How regrettable it is that our President and his allies believe that lowering the minimum age of criminal responsibility will stop children from growing up as criminals. We object to this belief. Incarcerating young children still immature in their thinking will more likely turn them into adult criminals.  Assistance, not imprisonment, for our children!

Third Issue: Uncertainty in the Provision of Housing and Basic Services. Uncertainty regarding the availability of housing and basic services continues to contribute to the daily Calvary of the urban poor.  The weight of the Cross on its bearers is reminiscent the hardships undergone in the past. The lack of decent housing is a blot upon the lives of poor people like us.  Our right to decent housing which the government is not providing is a burden we are still carrying.  When might our right to have decent housing be fulfilled in response to our longstanding requests?  Focus on in-city housing! Address the needs of those relocated to distant off-city sites!

Fourth Issue: The Proliferation of Misinformation and Fake News.  In reading, observing and listening, news comes to us from all over. People are actively expressing their views and opinions through social media.  On the one hand, we have beneficial ways of gaining access to information and finding spaces to express our feelings. On the other hand, there is an apparent blurring of the truth so that we wonder whether what we are reading or hearing is truth or falsehood.  What we see now is the spread of misinformation and fake news.  Whether individuals or institutions, these providers should give us correct information as a means of  ensuring that we do not get biased news or distorted visions.  This confusing situation violates our rights to correct information and the truth.  Rather, the truth that our government should confront is the hard life we as urban poor live. Listen to the poor – and all the kalbaryos that dramatize our long experiences of hardship in this unjust society.

Fifth issue: Climate change and evictions.  The government frequently uses climate change as an excuse to evict us urban poor from the city and relocate us to distant off-city settlements. However, climate change is also an issue of social justice.  As regards risk and disaster management, it is not only the location and physical conditions of our houses that matter; it is organized urban poor groups which formulate various procedures to mitigate the effects of calamities in our communities.  In reality, our approaches to addressing calamities are undermined by the limited opportunities for permanent employment, the lack of benefits, and the small earnings stemming from our work and livelihoods.  Therefore, instead of forcing us out of our places, what the urban poor need is decent work that is available in the city. Don’t use climate change as an excuse for evicting the urban poor from our places in the city.

Sixth issue: The Culture of Fear and Lack of Respect for Women. We condemn all instances of violence because it leads to the destruction of the family in creating fear among parents, older people, siblings and orphaned children, and bringing great distress to our community. Because of the violence caused by Oplan Tokhang, many are now afraid to approach and assist a neighbor in need, fearful they will be accused of coddling addicts or pushers. We agree with the government’s statements that only a false peace will be restored by its current efforts as no genuine peace can occur if human rights are violated and fear is sown among the citizenry.  Violence must also be condemned, especially against women, along with widespread comments aimed at diminishing their worth as human beings. Considering women as commodities or things along with the double standard being displayed by our government officials are vulgar in relation to our mothers, sisters, and daughters. End the culture of fear; respect women!

Seventh issue: Decreasing space for the free and critical participation of the citizenry.  Our democracy is genuine only if every person can state his or her viewpoints without coercion or threats from various officials in powerful positions.  People will participate most effectively when they are not forced to agree to a certain point of view, especially if they feel that view is wrong. So, what really is the state of democracy in our country today? It appears that the space for free and critical expression is becoming smaller and smaller. Given this situation, the people begin to hold back from participating in the directions toward which the country appears to be moving, thereby losing the spirit of democracy. We will not agree to this trend of the government to remaining deaf to the voices of the people. Listen to the voices of the poor and recognize our right to participate in correcting the horrors taking place in our country.