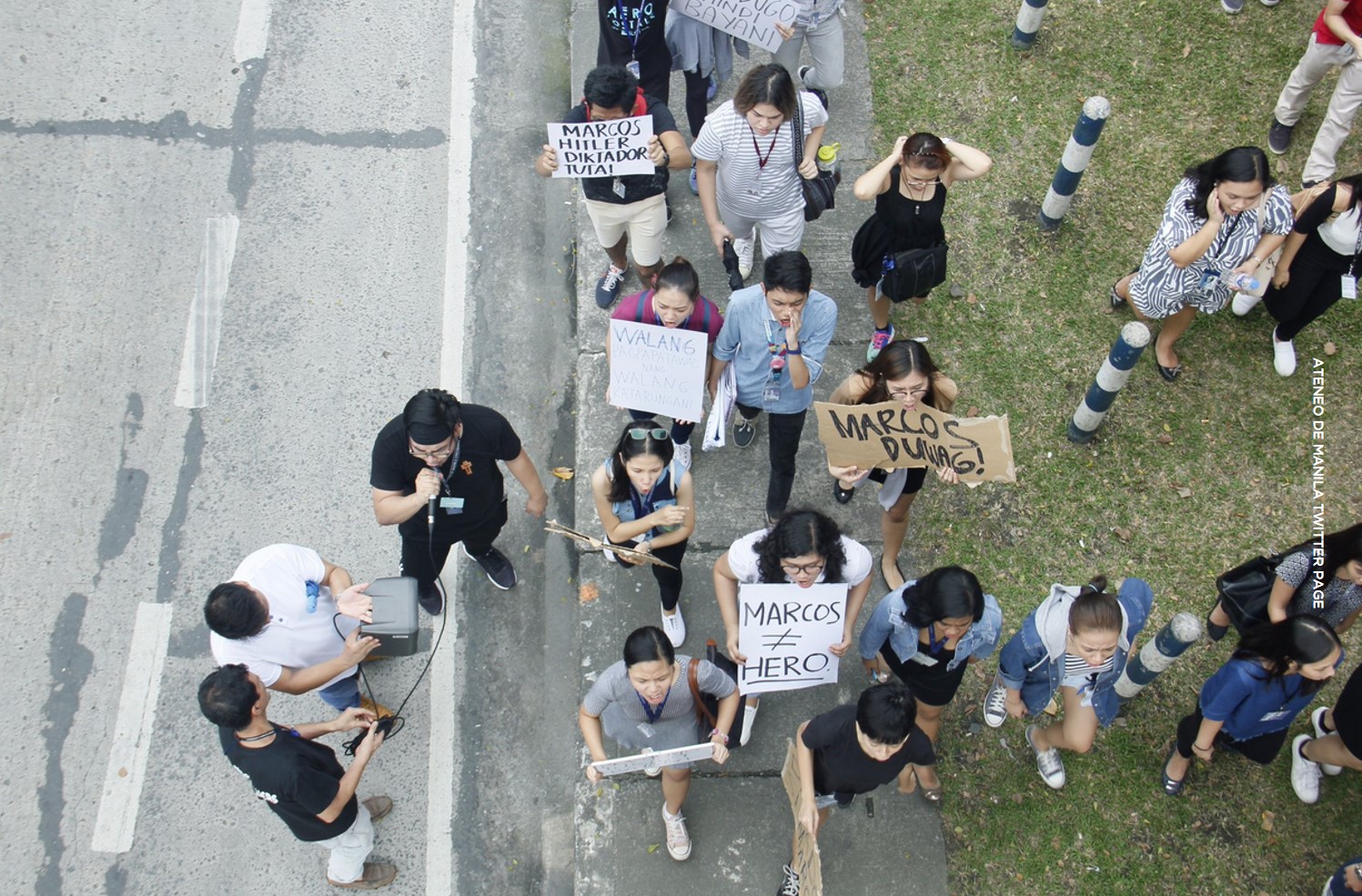 Millennials against the Marcos burial

I never thought I could be grateful to the Marcoses for anything. But their insistence on burying the dictator Ferdinand E. Marcos’ remains in the Libingan ng mga Bayani has given me a precious gift: hope in the next generation.

Until the day the Supreme Court ruled to allow the burial, I was convinced my generation had failed to pass on to the next one the bitter lessons of our own youth under dictatorship. As a demonstration congealed on the Ateneo de Manila campus where my institute is located, I texted friends my age: “Ateneo mobilization at Gate 2.5. I predict 20 students. Bring warm older bodies.”

When our staff joined the march midway through campus, maybe 100 warm younger bodies were in it. By the time we got to Gate 2.5 the march had picked up hundreds more, pushing onto a long stretch of Katipunan Avenue.

The student leaders were passionate and inexperienced, using instinctive self-deprecating charm to work the crowd. I was proud of them. I was also proud of how my generation of parents and teachers had managed, however unsystematically, to convey our historical memory and our value for democracy to our young.

At 6 p.m. on the day Marcos was buried, young people in black were spilling from the front of the Edsa People Power Monument, chanting protests, exuberant in their collective power. The demonstration was postmodern, with spontaneous action at the margins while a program at the center labored to be heard above shouting and traffic. More millennials arrived as the evening wore on; after all, their parties begin between 9 p.m. and midnight. I retired early, confident that the next generation would carry on.

But it is too early for activists of my generation to retire entirely. There is too much we need to fix together with the next generation.

The Marcos burial is just one battle. Our democracy is under siege from many other fronts. Government officials and politicians mandate killing as a solution to our nation’s ills. They denigrate due process, the rule of law, human rights. They threaten “rhetorically” to suspend the privilege of the writ of habeas corpus and declare martial law. Some day they “just might,” as President Duterte puts it. They try to silence opposition by putting skeletons in closets and dragging skeletons out. Their fans and trolls, many also millennials, viciously bully those who disagree with them.

Premillennial and millennial activists need to “move on” from the Marcos burial, but not as Mr. Duterte, the Marcoses, and some archbishops prescribe, by “forgiving” unrepented sins and stifling our dissent for the sake of a false “national unity.” “Moving on” must mean turning the fight against the Marcos burial into a larger fight for democratic principles and institutions.

We need to explore together the roots of this fight in faith, because individual beliefs and political ideologies are fragile foundations for the long-term struggle this is proving to be. For Catholics, anchoring the struggle in faith will be difficult because our young people are more secularized, partly due to our hierarchy’s focus on issues of sexuality and reproduction. Moreover, many bishops who seemed ready to depose the previous administration over contraception are now mute about the slaughter of the poor and the erosion of democracy. The irreverent young see such moral inconsistency more sharply than the pious old. But with the support of many other religious, priests, and bishops who have prophetic courage, millennials and premillennials can together renew the conviction that protecting human rights and defending democracy is building the kingdom of a loving God.

And if our generation can only keep from lecturing young activists and trying to turn their demonstrations into carbon copies of our own, we can learn from them, too: from their individuality amid community, their playful irony, their creativity, their willingness to break rules that don’t matter for the sake of rules that do.

Millennials against the Marcos burial, this is now a fight for your future more than for ours. But for the few decades we have left, we are in it with you.