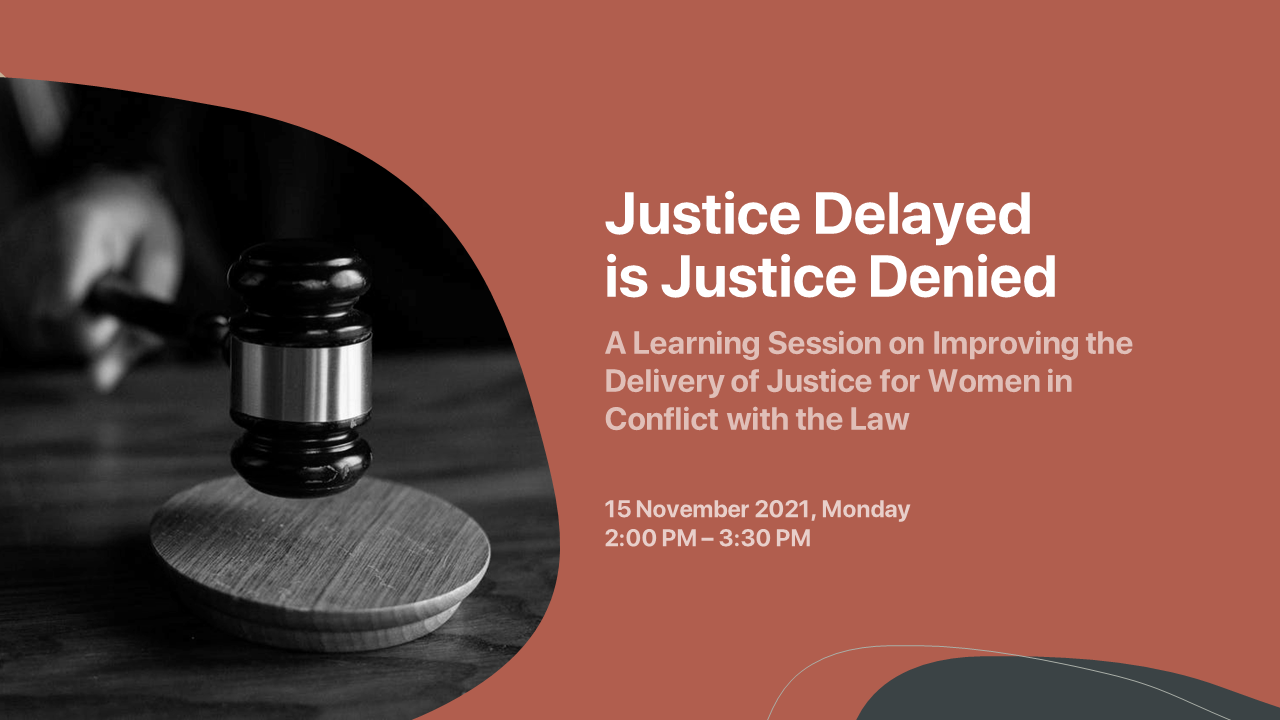 Justice Delayed is Justice Denied: A Learning Session on Improving the Delivery of Justice for Women in Conflict with the Law

On November 15, 2021, UN Women and the PHILSSA-led consortium of NGOs implementing the “Delivery of Women’s Legal Literacy and Access to Justice Services in the Philippines” Project held a learning session to understand the systemic causes behind the lack of responsiveness of the Philippine legal system which hinders access to justice by persons deprived of liberty (PDLs). Many of these PDLs spend unnecessarily long periods of incarceration while waiting for hearings to be scheduled and their cases to be resolved. Women deprived of liberty become particularly more vulnerable to forms of violence due to the prolonged detention.

One perennial problem in the judiciary has been the lack of judges that results in clogged court dockets, and this has been attributed to the failure to fill vacancies for judges and justices. The 1987 Constitution gives the president 90 days from the submission of the list of nominees by the Judicial and Bar Council (JBC) to appoint judges for the lower courts, but this has not been complied with for many years. Lack of access to quality legal assistance also blocks access to justice. Poor and low-income PDLs in need of free legal services heavily depend on the understaffed Public Attorney’s Office (PAO), which handles hundreds of thousands of cases every year. These problems are embedded in a policy context where policing and prisons are the institutions most primed to “solve” social problems.

Sharing their insights on the topic were Atty Sharmagne Joy Binay of the PAO-Manila and Atty Gian Miko Arabejo of the Alternative Law Groups (ALG), a coalition of legal resource NGOs adhering to the principles and values of alternative or developmental law. Ms Isabelita “Bing” Solamo-Antonio, the project team leader, served as the moderator. The interactive discussion among the guests followed after Ms Jona Marie Ang of UN Women Philippines welcomed the participants and gave an overview of the project.

What is slowing down the justice process in the Philippines?

For Atty Arabejo, judges are constantly overloaded, and more so now because of the exponential increase in the number of drug-related cases that need to be resolved. Ideally, each municipality and city should have an especially designated drug courts, but this is not always the case. Even in areas with drug courts, the volume of cases is too much for the judges to handle. Trials are not conducted every day, and judges would prioritize criminal cases. Many cases are also reset for several reasons, affecting upcoming schedules of hearing other cases; unheard cases scheduled for the day are automatically postponed and rescheduled. In his experience, it is common to have case hearings spaced two to three months apart.

Lack of permanent/regular court personnel and limited court spaces add to the problem. There are contractual workers—including stenographers and interpreters—who leave when their contract expires. There are court branches that share courtrooms, and this affects the scheduling of case hearings. With the ongoing pandemic, courts have shifted to virtual hearings but not all courts and jails are equipped with new modes by which to dispense justice such as video-conferencing technology.

Atty Binay shared the observation of Atty Arabejo about the factors that cause delays in case resolution and congestion of courts. She added that these problems have become worse because of the pandemic, and unfortunately, the long and arduous judicial system—from preparing the necessary documents after an arrest to raffling cases to different branches of local courts—has not adapted with the times such as improving communication lines among justice actors and individuals involved. For example, the accused would receive his subpoena sent via the post office after three weeks or, if he is in the province, after five months. As court hearings shift to online platforms because of the pandemic, not all participants are equipped with the necessary technology. Atty Binay said that aside from the courts and jails, as Atty Arabejo pointed out, not all police stations could provide the persons in their custody with the needed space and equipment to attend a virtual hearing. There are cases where accused individuals in police-supervised custodial facilities must wait for their turn in using one computer.

PAO lawyers like Atty Binay also guide the accused about their options (such as availing of plea bargain), but in many cases, the charged individuals could not decide immediately, affecting the progress of their cases. Even if an accused is allowed to post bail or a bail bond to get out of jail, he or she cannot afford to post bail. Atty Binay said PAO helps such clients to file a motion to reduce bail, but even a lower amount remains beyond the capacity of the poor.

The unavailability of witnesses likewise results in slow court processes; PDEA officers, for example, could not accommodate all court invitations because they could be in another hearing.

Slow court processes also affect PAO lawyers like Atty Binay. As lawyers in the go-to agency of indigent clients, they face an enormous task of attending to so many cases. In her case, Atty Binay handles an average of thirty to forty cases per day; such was the result of the government’s anti-drug campaign. “We can only do so much,” Atty Binay shared, “and we can only maximize the resources that we have.”

What reforms can be put forward to solve the problems hounding the justice system?

For Atty Binay, improving court facilities, jails, and police precincts—including the designation of secure and adequate space for hearings and ensuring internet connectivity—will help a lot. This, however, requires sufficient funding from the national government.

Atty Arabejo said that even in municipalities and cities where there are enough courtrooms, vacant posts of judges causing the slow delivery of justice must be addressed. Although the Supreme Court has instituted measures such as the conduct of continuous trial of criminal cases that have helped ease dockets in some courts, more judges who will manage the still growing number of pending and new cases must be appointed. (Note: The continuous trial rule adjusts hearing days from Mondays to Thursdays with Fridays devoted for the promulgation of decisions, arraignment and pretrial and motions.) Unlike the usual hiring process in government, judicial officers undergo a more rigorous appointment process sanctioned by the Judicial and Bar Council to ensure the quality of judges. In the case of low-income municipalities that cannot afford a judge, municipal circuit trial courts are established where a judge hears cases from different localities.

Because the anti-drug campaign of the national government resulted in a spike of drug-related cases that need to be resolved by the court, Atty Arabejo encouraged civil society groups to participate in calls for a review of Republic Act No. 9165 or the Dangerous Drugs Act of 2002. The said law, he explained, imposes “very punitive” punishments on persons possessing or selling even miniscule amounts of illegal drugs or engaging in non-problematic drug use. The drug war has revealed the limited absorptive capacity of institutions across the criminal justice chain. Its outcomes, which include court docket congestion, point to a need to consider adapting “progressive” views about drugs that see it as a public health issue. The DOH, PDEA, and PNP, according to Atty Arabejo whose office has done numerous trainings and seminars with these agencies, recognize the need for alternative ways of dealing with people who use drugs such as community-based rehabilitation for “mild users”. The current drug law, however, binds them to enforce it. Civil society organizations, such as ALG, have been closely monitoring the progress of bills seeking to amend the existing drug law, and he encouraged the participants to do the same.

Other ways for CSOs to contribute to speeding up cases were the following:

Non-custodial measures and other ways to decongest court dockets

Atty Arabejo believed that alternatives to incarceration must be explored, especially for those charged with non-violent offenses. These, however, requires legislation, particularly the amending of the Revised Penal Code. Local government units and the barangay councils can also pass ordinances that do not impose imprisonment for persons involved in non-violent crimes. He encouraged the forum participants to engage senators or their district representatives to get an update on bills seeking to amend the Revised Penal Code, as well as local council members to explore passing ordinances that would allow for suitable types of treatment and supervision for persons figuring in crimes that do not involve the use of any force or injury to another person. Atty Arabejo added that the barangay LGUs, as seen from their role in the implementation of the Anti-Violence Against Women and their Children (VAWC) Act of 2004 or R.A. 9262, can take on a “powerful role” that could result in the case not reaching the court. Local officials can be trained to effectively settle disputes and deliver justice, and assisted in gathering evidence, preparing documentation, and the like. Working with the Commission on Human Rights (CHR) on such advocacies would be helpful to ensure that human rights principles are upheld.

Atty Binay agreed and underscored that “for corrective mechanisms to [work], they [the charged persons] must be allowed to be reformed outside the institution.” She cited one case in which the PAO insisted that the number of months or years a person on trial had stayed in prison must be deducted from his or her sentence, including admission to a drug rehabilitation center. Less time in prison would mean more time with their families, which is valued especially by women with children, single mothers, and breadwinners.

To this, the Community Service Act would be instrumental. She added that in November 2020 the Supreme Court issued guidelines on the imposition of community service for crimes for which the penalty is less than six months of imprisonment. Considering that those with criminal record would have difficulty finding a job, Atty Binay proposed requiring the offenders to commit to a skills training program as a form of community service. Community service at the barangay level, however, needs to be further mainstreamed for it to be a “norm in society.”

She also agreed with the view of Atty Arabejo about the role of barangay LGUs in mediation and conciliation. In cases where resolving the issue failed at the barangay level, the PAO has a mechanism that exhausts the possibility of settling it outside of the court.

Mr Benedict Balderrama of PHILSSA and Dr Anna Marie Karaos of ICSI, the lead NGO for research and advocacy, each gave a synthesis of the discussion and a few parting words.■