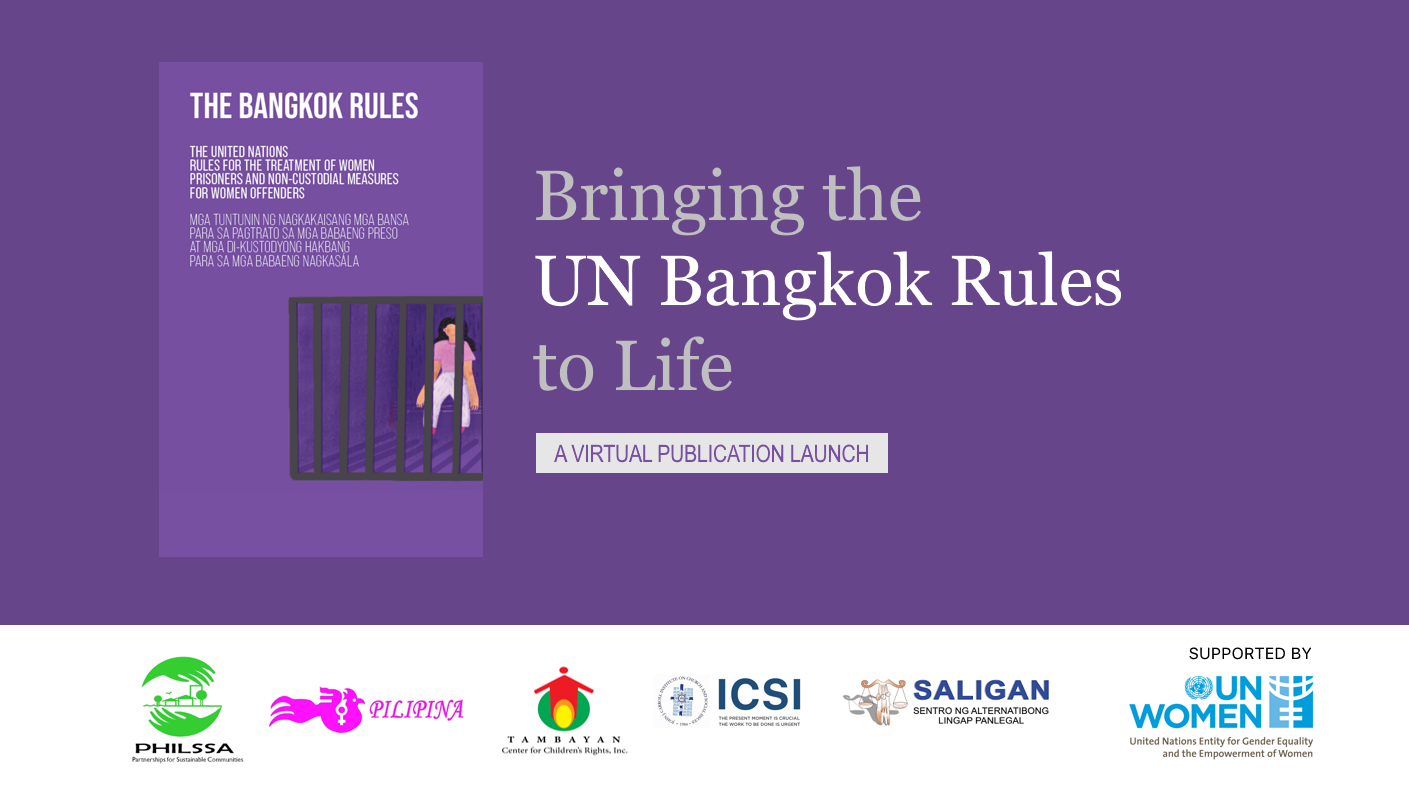 Bringing the “Bangkok Rules” to Life

On December 6, PHILSSA and UN Women launched the Filipino translation of the United Nations Rules for the Treatment of Women Prisoners and Non-custodial Measures for Women Offenders, also known as the Bangkok Rules. The publication has been available for online download since August 2021, but PHILSSA and the NGOs implementing the “Delivery of Women’s Legal Literacy and Access to Justice Services in the Philippines” Project found it fitting to formally launch it as part of the 18-Day Campaign to End Violence Against Women (VAW), a campaign initiated in 2016 by the Inter-Agency Council on Violence Against Women (IACVAWC).

As Ms Jona Marie Ang of UN Women noted in her welcome remarks, women in conflict with the law (WICL), especially women deprived of liberty, also suffer violence when they are denied access to justice and their dignity is not respected when they are in detention facilities. This lack of justice is increased as the female prison population has been steadily rising around the world. Adopted by the UN General Assembly in 2010, the Bangkok Rules guides states in ensuring that the gender-specific needs of women are properly addressed and given adequate resources. Ms Ang added that the emphasis of the rules on noncustodial measures rings more clearly today as the COVID-19 pandemic continues to bring increasing health risks to women in congested jails and prisons.

Before hearing the messages of the guests, Ms Isabelita Antonio-Solamo of PHILSSA shared how the principles of the Bangkok Rules have been animated in Davao City, one of the sites for this community-based project, the other being Quezon City. She said that as early as 1997, the city’s Women’s Development Code already recognized the rights of women in detention. Under the project, PHILSSA and its local NGO partner, the Tambayan Children’s Development Center, are pursuing an amendment to the implementing rules of the code that would explicitly state women deprived of liberty as one of the groups of women whose rights and dignity must be recognized. Specific provisions of the Bangkok Rules that are being introduced in the guidelines are those pertaining to admission requirements; health, sexual and reproductive health services; living spaces; situation of vulnerable women in detention facilities; food, water, and sanitation; safety and security; and social reintegration. Although the city government has been addressing these concerns in the Davao City Jail through the building of the Ray of Hope Village, more needs to be done especially in the context of the pandemic.

The first to give her remarks was Dr Jean Lindo of the Davao Medical School Foundation, one of the private sector groups extending support to the Ray of Hope Village in Davao City. Speaking also as a member of the Gabriela Women’s Party, she shared some updates on the progress of House Bill No. 5285, a proposed law filed in 2019 that seeks to protect the dignity of women in conflict with the law, particularly women deprived of liberty, which if passed into law, will complement the principles set out in the UN Bangkok Rules. Although the need to uphold the rights of women PDLs is mentioned in the Magna Carta of Women, HB 5285 defines the rights of incarcerated women given their gender-specific vulnerabilities. As of December 2021, the bill is awaiting the approval of the House Committee on Justice for it to reach second reading; there is still a long way to go before it becomes a law.

Atty Kristine Yuzon-Chaves, executive director of the Philippine Commission on Women, said that the commission, as the main policy making and coordinating body on gender equality and women’s concerns, has the mandate to ensure that gender-responsive programs and interventions for women in detention and WICL are provided by the PNP, BJMP, and BUCOR-CIW. It also works with the Bureau of Immigration and local government units. It evaluates and recommends measures to safeguard the rights and interests of women PDLs and WICLs. The Bangkok Rules provides comprehensive guidelines and detailed interventions for a gender-responsive treatment of women PDLs until their return to the community and these will guide concerned government agencies.

For the PCW, the “most notable provisions” of the Bangkok Rules are those under the second section which pertain to classification and individualization, prison regime, social relations and aftercare, pregnant women and breastfeeding mothers, and juvenile female offenders. These present a “wide array” of needs of women PDLs and ways for government institutions to meet these. In doing so, the PCW director encouraged government agencies and civil society organizations present in the launch to reach out to the commission in pursuing policy reforms that benefit WICLs and women PDLs. She said that PCW has a “machinery” for advocating women’s advancement and gender equality nationally and internationally. Atty Yuzon-Chaves reiterated her openness to work with PHILSSA on different endeavors that promote the rights of WICL and women PDLs.

CInsp Leonida Bendijo of the BUCOR-CIW shared that since the enactment of Republic Act No. 10575 or “The Bureau of Corrections Act of 2013”, the CIW has been developing and providing services that address the needs of women in its facilities. The existing programs and measures of the CIW can be said to be consistent with the UN Bangkok Rules in safeguarding the rights and welfare of women PDLs. Specifically, the principles under Rule 69 (on the reintegration of released PDLs into the society) are reflected in the current interventions given by the CIW to prepare women return to their normal lives outside of prison. Training activities that build gender-responsive skills and capacities, specifically understanding the human rights of women prisoners, is one recommendation of the UN Bangkok Rules that CInsp Bendijo deemed important for the CIW staff and personnel. Rule 57 on exploring alternatives to imprisonment considering the severity and circumstances surrounding the crime a woman committed, and Rule 70 on raising public awareness about the rights of women PDLs are likewise worth considering for policy measures. Appreciating the invitation extended by PHILSSA, CInsp Bendijo said she looks forward to forging a partnership with the group in extending and augmenting existing services that improve women’s access to justice.

Underscoring the BJMP’s duty to maintain peace and order through humane safekeeping and development of persons in conflict with the law, regardless of their gender orientation and sexual identification, JSSupt Filipinas Fulgencio said the bureau recognizes that women in the criminal justice system have gender-specific needs. Long before the creation of the Bangkok Rules, the BJMP has been protecting the rights and dignity of women in the facilities under its supervision. BJMP facilities must have female dormitories monitored and managed by female wardens to ensure that they are safe from any form of harassment and abuse and the specific needs of women are met. Moreover, the BJMP has adopted a policy that prescribes guidelines for protecting the health of pregnant PDLs and those with infants (who are allowed to stay with the mother for one month); as of October 2021, the BJMP has 76 pregnant PDLs in its records. There are also programs that provide services related to reproductive health, mental health, and psychological wellbeing. Considering the congested conditions in jails and the high risk of contracting infectious diseases, it is not in the best interest of children to stay with their jailed mother. Nonetheless, the bureau tries its best to help women in jail to continue keeping an open line with their families. Prior to the pandemic, women see their children in child-friendly visitation areas. Programs that enhance the skills, literacy, as well as the physical, spiritual, and mental state of female inmates are in place with the help of other government agencies and nongovernment organizations.

The BJMP’s Legislative Liaison Office headed by JSSupt Fulgencio has been actively pushing for the passage of bills in the House of Representatives and the Senate that aim to improve jail conditions and therefore protect the rights and dignity of incarcerated women. She asked the participants to lend their voices in advocating for these important correctional reform policies and in proposing bills that incorporate the Bangkok Rules into domestic laws to make the criminal justice system responsive to the needs of women. Also worth supporting are advocacies for greater resources to improve the jail facilities in the country. Civil society groups can also help the BJMP in orienting jail personnel about the rights of women PDLs and training them to be gender sensitive.

Atty. Yuzon-Chavez offered the services of the PCW in training the personnel of BJMP and BUCOR to equip them with the knowledge and skills needed to concretize the Bangkok Rules in the facilities they manage and control. UN Women adviser Ms Annie Serrano, who also used to work at the PCW, welcomed the opportunity and said that Bangkok Rules can be used to guide the commission in monitoring the compliance of these agencies to GAD mainstreaming policies of the government. The Bangkok Rules provides specific indicators for meeting the needs and protecting the rights of WICL and women PDLs who are not considered in existing monitoring indicators that mostly cover VAWC cases. Atty Yuzon-Chavez expressed willingness to meet the group again to discuss this suggestion.

JSSupt Fulgencio encouraged the participants to study and submit position papers on the pending bills in the House of Representatives and the Senate. These are:

Unfortunately, she said, the two bills in the Senate do not have counterpart bills in the Lower House; CSOs may consider pushing for these. On the part of the PCW, Atty Yuzon-Chaves said that although these bills are not in the priority legislative agenda of the commission, it will also consider lending its voice in pushing for the passage of these proposed laws.

In his closing remarks, PHILSSA National Coordinator thanked the guests from government and acknowledged the translator of the publication, Palanca awardee Roberto Añonuevo, and the illustrator, Ms Queenie Anne Umadhay. He said that consultations will be held to discuss how the Bangkok Rules can be mainstreamed in existing policies, programs, and services of key justice actors.