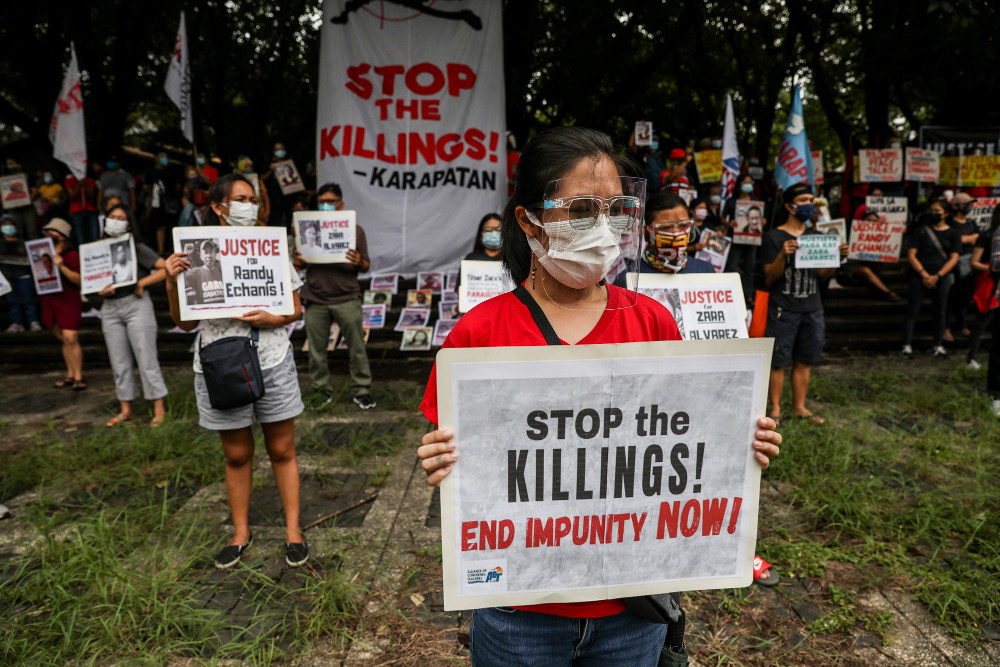 Who we want to be

I was deeply shaken by the recent torture and death of Randall “Randy” Echanis, chair of Anakpawis and tireless advocate for the poor and landless. When the first reports emerged, I thought it was strange that his killing departed from the usual modus operandi of hired assassins, with which we have regrettably become so familiar: drive-by shootings by hooded and bonneted tandem riders who disappear at once and are never brought to justice.

There was that strange tussle over the body between police and Ka Randy’s family, and the police’s theory that it might have been an akyat-bahay gone wrong. Finally, autopsy results showed that, besides suffering the knife wound that fatally ruptured his aorta, he had been hit repeatedly in the head with a blunt weapon, and sustained 12 incised wounds in his back that did not penetrate the lungs — cuts meant to cause pain rather than to kill. In other words, he had been tortured.

Why does this incident shock? It comes on the heels of so many others; one can hardly keep up with the names of killed activists. There was Zara Alvarez, a human rights worker gunned down on the very day of Ka Randy’s funeral. Zaldy Meraya and Bebe Tobino, tagged by the military as communists, and Harold Tablazon and Glenn Bunda, peasant organizer and Sangguniang Kabataan chairperson respectively, were killed on June 20. On May 26, farmer leader Allan “Mano Boy” Aguilando was shot, becoming the 251st farmer-victim of extrajudicial killings (EJKs) under the Duterte administration, according to farmer group Kilusang Magbubukid ng Pilipinas. Perhaps it was not surprising that Global Witness reported in July that the Philippines was the second most dangerous country in the world (after Colombia) for environmental and land activists in 2019.

While we are talking about killings, need I mention the thousands of EJKs in the government’s antidrug campaign? The latest official death count (of suspects who died in antidrug operations) stands at 5,722, though human rights groups say that the real figure could be several times more. By and large, four years on, we have become inured to this constant stream of killings, in which human life is so casually and inconsequently snuffed out by state policy.

Perhaps it takes the gruesome cruelty of Ka Randy’s torture and killing to shock us, once again, out of our collective stupor. Watching Michelle Obama’s speech at the recent Democratic National Convention in the United States, I was surprised by how much her sentiments echoed my own. “Right now,” she said, “I’m deeply troubled by what our kids are witnessing — a nation that’s under-performing not just on matters of policy, but on matters of character. In our hearts, we know that so much of what’s happening is just not right. It’s not who we want to be.”

Is this who we want to be — a society where human life is cheap and easily discarded, where those who stand up against injustice and speak truth to power are violently silenced while the rest of us look on, discomfited but not particularly moved to act? Where the death penalty is, once again, on the table, even as we know from long experience that violence can never be a true solution to social ills? “I have set before you life and death,” says the God of the Christian scriptures in whom so many of us profess to believe. “Now choose life, so that you and your children may live” (Dt 30:19). What do we choose?

Thankfully, while the situation looks bleak, the seeds of change are already in each of us. Ka Randy, Zara Alvarez, and the many who have laid down their lives, show us that we, too, are capable of great courage, strength, and untiring hope. Pope Francis, another courageous change-maker, reminds us in his encyclical “Laudato Si”: “Human beings, while capable of the worst, are also capable of rising above themselves, choosing again what is good, and making a new start, despite their mental and social conditioning. We are able to take an honest look at ourselves, to acknowledge our deep dissatisfaction, and to embark on new paths to authentic freedom. No system can completely suppress our openness to what is good, true and beautiful, or our God-given ability to respond to his grace at work deep in our hearts.”

Let us not be afraid to choose life, trusting that the forces of death will never overcome it.

This article was first published in the Philippine Daily Inquirer. Photo by Basilio Sepe for BenarNews.