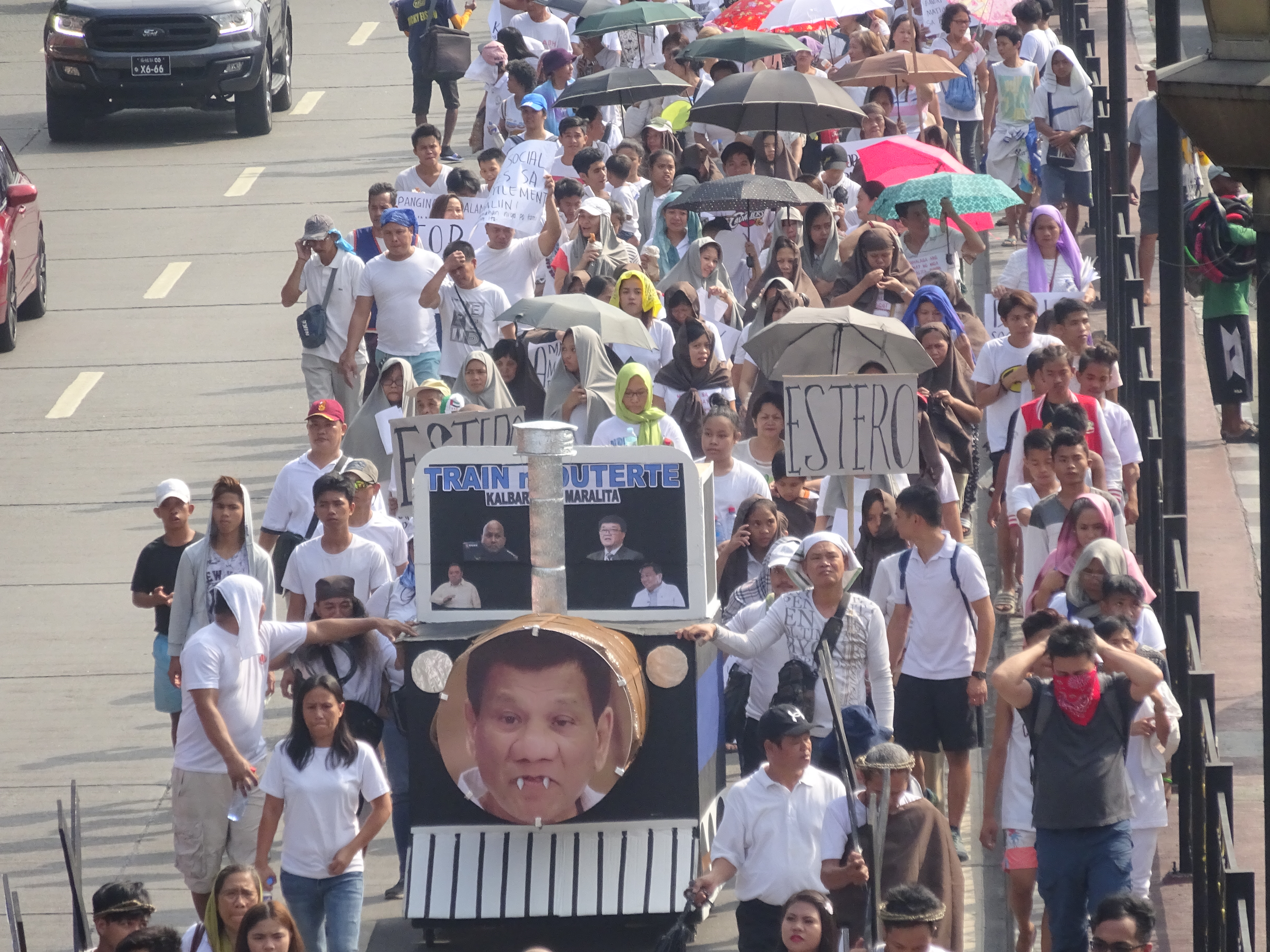 Watch out! The train is coming!” yelled the crowd of urban poor clustered around the railroad tracks by the España station. It was Holy Week and seven cross-bearers were kneeling on the tracks to protest government policies threatening their already precarious existence. They scrambled to get out of the train’s way, and then quickly jumped back down once it had passed, crosses and all. Dramatizing their plight to the swarming TV crews was crucial.

Tacked to one cross was a sign that read: “TRAIN LAW.” Blaming the recently passed Tax Reform for Acceleration and Inclusion Law for the alarming rise in commodity prices and transport fares, the urban poor maintained that it was now even harder to feed their families. Six additional crosses further attested to their issues, with signs protesting Demolition, Resettlement, Build-Build-Build (Evict-Evict-Evict), Extrajudicial Killings (EJK), Justice System, and Cha-Cha Federalismo. Upon reaching Mendiola Bridge, the 3,000 or so men, women, children and elderly heard seven urban poor leaders link these protests to Jesus’ Seven Last Words for some two hours. They listened, prayed, wept, sang hymns, and ended the event by picking up their accumulated debris to leave a clean space for the next set of protesters.

This street reenactment of the Passion of Christ by the urban poor expressed dramatically how they assess their society today. Resonating with the scourging of Jesus, they slammed the continuing attacks on them as having diminished their hope in 2016 for improved lives. While some did in fact achieve breakthroughs with government support for onsite or nearby in-city relocation, the vast majority remain less fortunate. Fears of eviction and relocation abound. The 18 new government resettlement sites ringing Metro Manila, to which most of the 100,000 Oplan Likas families were relocated, continue to face a serious lack of employment, inadequate basic services and transportation, low-quality housing and insecurity. The nearly 40 older sites still grapple with those problems to varying degrees.

At the same time, construction is booming in what is now known as the Greater Manila Area, encompassing the eight provinces surrounding Metro Manila. Led by the private sector, the idea is to transform Mega Manila into a “world-class competitive global green city” comparable to Paris, Dubai, or Singapore. Accordingly, huge tracts of land have been transformed in the past few years into high-end residential subdivisions, luxury hotels, golf courses, shopping malls for the wealthy, resorts and other playgrounds for the rich. The needs of displaced low-income families, on the other hand, are dismissed as marginal concerns or someone else’s problem.

In effect, developers have become the nation’s virtually uncontrolled urban planners. With large landowners eager to sell, subdivisions, skyscrapers and other massive projects are rising fast. Local government units respond eagerly so as to reap the tax benefits of these investments, enhance the city’s independent stature, and magnify their own power. The LGUs’ mandate under the Urban Development and Housing Act to identify sites for social housing has fallen by the wayside.

There are mechanisms in place for subdivision developers to allocate 15 percent of their project area or costs to benefit displaced residents through credits listed in the balanced housing legal scheme. But one wonders how extensive and successful these and other comparable programs are in making a dent on the ever staggering housing backlog affecting the poor. If these compensatory mechanisms are not working well or apply to only a few of the many affected workers and poor families in Mega Manila, the consequences can be severe. The situation may well provoke mounting urban unrest, the Kadamay invasions being a case in point. Nor can one discount the growing frustration and eruption of street and drug violence fueled by angry youth.

Land acquisition by displacement, as geographer A.A. Ortega calls it, may thus be spewing hundreds more families into new informal-sector slums in the provinces surrounding Metro Manila, adding to the families already there. Yet ironically, these slum dwellers are there to serve the well-off as domestic helpers, child minders, caregivers, cooks, gardeners, security guards, and drivers. They are the city’s street sweepers, janitors, messengers, waitresses, sari-sari store owners, street peddlers, massage parlor attendants, tricycle drivers, small-scale manufacturers, and motorcycle repair shop owners. Without access to affordable and nearby housing, they will have little choice but to become informal settlers in these modernizing cities.

Government-owned urban land which if sold is supposed to prioritize social housing needs appears to be turning instead into high-end development areas. Even presidential proclamations awarding land to their resident-poor decades ago have by and large not been fully implemented, as Baseco, Lupang Arenda and Commonwealth residents can testify. Nor can one easily discount the environmental dangers generated by a rising heat index from tons of cement covering former agricultural land. G. Nicolas has pointed out that satellite images of Metro Manila’s urban sprawl into megalopolis status show a nearly doubling in area from 424 square kilometers in 1988 to 712 sq. km. in 2017.

All these constitute a wake-up call to developers to recognize their part in contributing to ever widening income disparities and social malaise. LGUs also need to carry out their regulatory functions and land banking mandates. Otherwise, the “competitive” in “competitive cities” may turn out to mean competition between the rich and poor accompanied by violence.

The “Kalbaryo” protesters of 2018 clearly expressed their wish to be part of the grand vision for an inclusive Philippines. Include us! Listen to our people’s plans! We want to participate in decision-making!

Unless the private sector and the government exercising due diligence take serious steps to reform poverty-promoting land policies of “accumulation by displacement,” the Easter joy sought by those at “Kalbaryo” will remain forever mired in the gloom of Good Friday. And all Filipinos will suffer.

Mary Racelis teaches social anthropology at Ateneo de Manila University, does research with and among the urban poor, and works alongside NGOs for people’s empowerment. This article was first published in the Philippine Daily Inquirer.