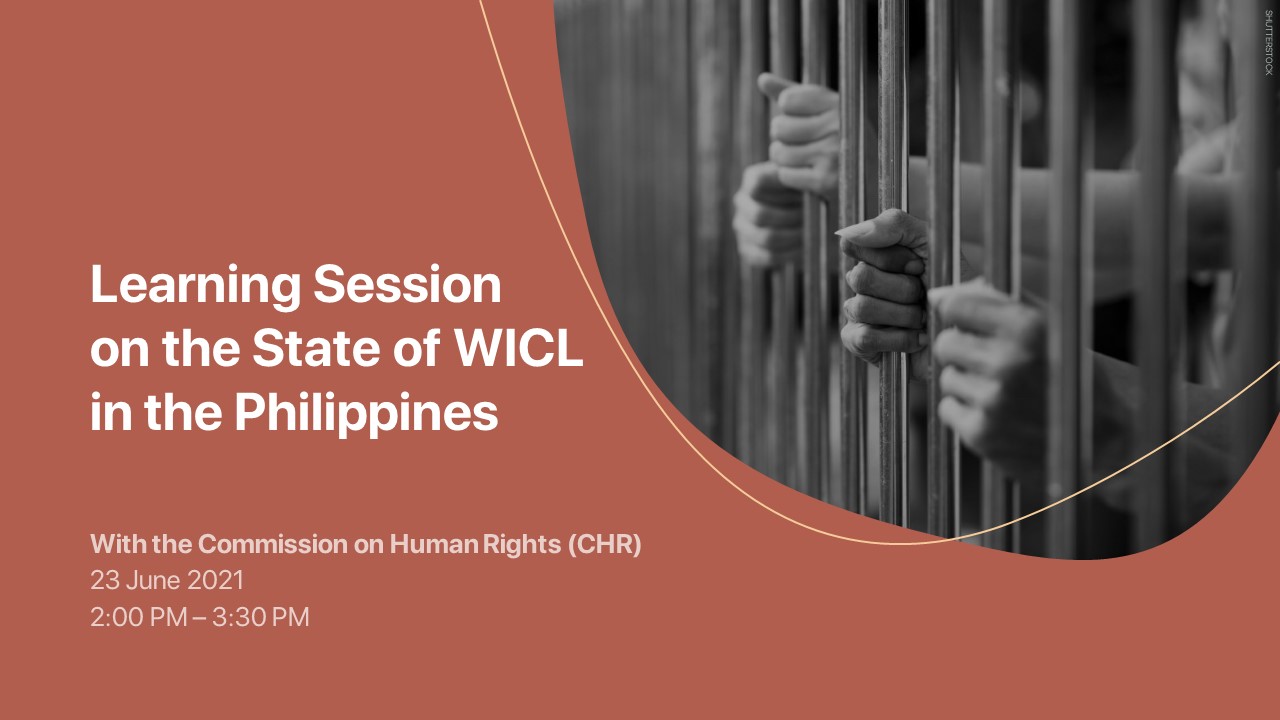 The State of Women in Conflict with the Law: A Learning Session with the CHR

In preparation for the dialogues with national “pillars of justice” under the “Delivery of Women’s Legal Literacy and Access to Justice Services in the Philippines Project” supported by UN Women, the Partnership of Philippine Support Service Agencies (PHILSSA) organized a learning session about Filipino women in conflict with the law (WICL) for the project consortium members. The session aimed to help the project implementers—PILIPINA, Tambayan Center for Children’s Rights (Tambayan), John J Carroll Institute on Church and Social issues (ICSI), and Sentro ng Alternatibong Lingap Panlegal (SALIGAN)—identify possible entry points and strategies for national-level advocacy for policy reforms and programs for WICL. Held on June 24, the online discussion featured a presentation by Atty Krissi Shaffina Twyla Rubin of the Gender Equality and Women’s Human Rights Center (GEWHRC) of the Commission on Human Rights (CHR). She gave an overview of the findings of the commission’s monitoring reports prepared by its regional offices after visiting places of detention (in coordination with the Bureau of Jail Management and Penology or BJMP), talking to a total of 241 female PDLs, and reviewing the inmates’ records.

Congestion, inadequate food, and lack of access to health services are the common problems faced by women deprived of liberty, but at the root of these is the slow justice system that renders them particularly vulnerable to abuse and inhumane conditions. This is most felt by older inmates whose cases are transferred from one lawyer to another (due to employee turnover at the Public Attorney’s Office (PAO) or neglect by the assigned lawyer). They are not informed if their case is making any progress, if they have served their sentence, or if they are qualified for good conduct time allowance (GCTA) or early release. The COVID-19 pandemic has made it harder for them to access lawyers and led to postponements of hearings as in-person visiting of detainees remains suspended. Their slow access to justice has become a mental and emotional burden for them.

Citing a 2017 audit report by the Commission on Audit (COA) which showed an alarming increase in the total jail population by 511%, the CHR noted that the overcrowding in jails and female dormitories violates the standards set by the Bureau of Jail Management and Penology and the United Nations’ Minimum Standard Rules for the Treatment of Prisoners. In some facilities, a single bed is shared by two inmates, or they sleep in hammocks. In others, detainees stay on the stairs when they need space. This problem has been most pronounced after the Duterte administration started its anti-illegal drug campaign. In the focus group discussions with female inmates, the CHR found that majority were indeed detained for drug-related cases, followed by those charged with committing estafa (swindling) and stealing. (Very few were detained for violent crimes such as murder and arson.)

The current penal system and policies fall short in responding to the gender-specific needs of women in detention. Even the design of correction institutions is primarily based on the needs of male prisoners. Facilities in the provinces have the least capacity to adequately address specific needs such as nutritious food (especially for the elderly and those with medical conditions), free and easily accessible potable water, and clean bathrooms and sanitation facilities that are important for women. There was a case of an inmate who died after slipping and hitting her head on the ground while fetching water.

Incarcerated women also face health risks because of the lack of toiletries and hygiene products such as sanitary napkins. Those who have no supplies would do the chores of other inmates or give up their bed for a night in exchange for such items. There are facilities without a ready supply of essential and maintenance medicines needed by those with chronic health conditions. Very few facilities have doctors, and if there is one, he or she comes in occasionally. Those needing immediate medical attention are brought to the nearest hospital but those who have conditions that visiting doctors could not address have to secure a court order to be able to see a specialist. Prenatal care is provided in most facilities, but post-natal care services are absent in the centers visited by the CHR. Only the Correctional Institution for Women (CIW) in Mandaluyong City has a facility for mothers with newborn babies.

Female PDLs are subjected to various forms of punishment when they commit an offense. There are stories of women who were not allowed to receive visitors after violating a rule. In some cases, they are denied of GCTA. Both forms of disciplinary measures violate the Bangkok Rules, or the United Nations Rules for the Treatment of Female Prisoners and Non-Custodial Measures for Women Offenders. There are also cases of violence (including torture) against WICL but, as the CHR report noted, the victims would rather not speak up for fear of retaliation. There was one case of sexual abuse that a concerned prison personnel reported to a CHR regional office. The CHR conducts monitoring visits to prevent such cases.

Women’s incarceration also affects their families. Their children experience discrimination in their communities, are bullied in school, or neglected by their supposed caretakers. In practice, the criminal justice system does not help the WICL get the assurance that the best interests of their children and dependents are safeguarded, contrary to what the Bangkok Rules prescribe. Detained women would rather not inform family members about their situation to avoid animosity and feelings of shame.

Women’s health needs, the types of offenses they committed, experience of violence and poverty, and parental responsibilities (even while in detention) are among the reasons why a gendered perspective to imprisonment is important. The CHR found cases of women sending money to their families. Others were engaged in low-paying manual jobs before their arrest.

Using the Bangkok Rules as the basis for its engagement, the CHR has been conducting capacity-building activities for the Bureau of Corrections (BuCor) and BJMP. Republic Act No. 9710 or the Magna Carta of Women also provides the policy framework to remind state agencies, specifically local government units (LGUs), about its mandate to “deliver the necessary services and interventions to women in especially difficult circumstances (WEDC),” which include women in detention. The CHR and its partner civil society organizations have been advocating for reforms in the criminal justice system that will adequately address the needs of WICL, especially those deprived of liberty.

The CHR has a tool for effective penal management that the regional offices use in conducting visits to monitor the situation of incarcerated women. Adopting a human rights-based approach (HRBA), the tool is currently being improved based on the results of the discussions with women PDLs and other stakeholders and made consistent with the principles espoused in the Bangkok Rules. The commission also plans to promote the use of the scorecard by the administrators of detention facilities for regular self-assessment.

Recommendations of the CHR and alternatives to imprisonment

Some of the policy recommendations of the CHR that the PHILSSA-UN Women Project might consider taking up with legislative “champions” or contributing to (through direct services) are the following:

The CHR has specific recommendations addressing the needs of women deprived of liberty that pertain to the following issues: (1) admission requirements and medical examination (considering the capacity of facilities without in-house doctors); (2) living space and issues of congestion; (3) situation of vulnerable populations within detention facilities; (4) food; (5) water and sanitation; (6) safety and security; and (7) rehabilitation and reintegration (e.g., livelihood and other community-based support interventions). Because policy reforms take time to result in improvements in the detention facilities, the CHR noted that prison personnel—also women—lobby with the local government and seek out donors to request for supplies (e.g., hygiene items and medicines), infrastructure (e.g., additional cells), and other assistance to be able to meet the needs of women deprived of liberty.

Other points for advocacy