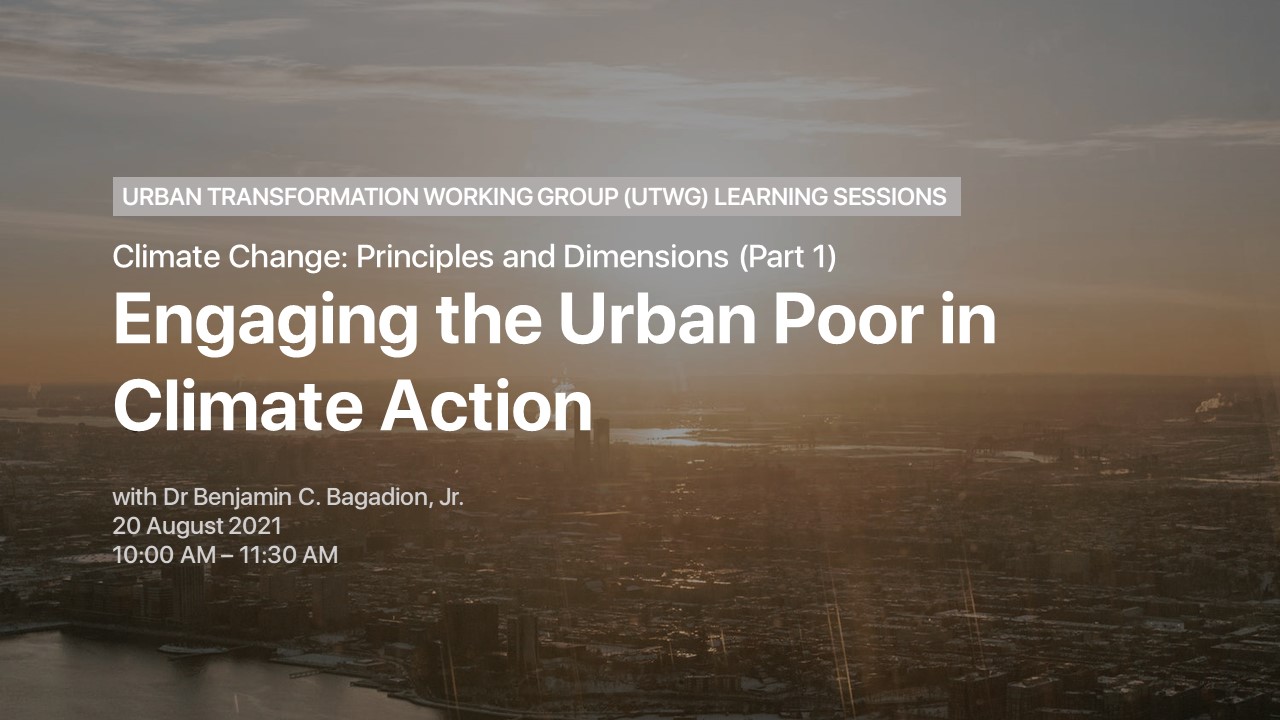 On August 20, 2021, the Urban Transformation Working Group (UTWG), composed of some member-NGOs of the Partnership of Philippine Support Service Agencies (PHILSSA), kicked off its series of learning sessions that aim to deepen the understanding of climate change and the transformative power of cities by the staff members of these organizations—community organizers, social researchers, and professionals assisting urban poor communities. This activity was supported by the Coastal Cities at Risk: Investing in Climate and Disaster Resilience (CCARPH) project of the Ateneo de Manila University.

The first learning session featured Dr. Benjamin C. Bagadion, Jr., author of various publications on biodiversity conservation and a practitioner-oriented academic with expertise in fields such as community organizing, development management, and environmental sociology. He also served as undersecretary for environment and research of the Department of Environment and Natural Resources (DENR) during the administration of Fidel V. Ramos. Drawing observations from his recent work in urban areas in Cebu and Leyte provinces, Dr. Bagadion shared his insights on how to get the urban poor to get involved in climate action.

Climate action as a poverty reduction strategy. Dr. Bagadion suggested that cities can adopt a ridge-to-reef program as a climate action to rehabilitate and improve nature’s capacity to sequester greenhouse gases and to lessen carbon emission. Such a program can consist of tree planting to reforest denuded areas in the ridge and rehabilitation of mangrove areas; the forest and the seas constitute a natural system for carbon sequestration. The urban poor can be mobilized and employed to plant trees, rehabilitate mangroves, and clean up coastal areas.

Zero-waste projects, which can help reduce methane emissions from dumpsites, can also become income-generating activities for the urban poor. Such projects, when implemented at a large scale, can provide livelihood and income opportunities to the urban poor. There are technologies to transform recyclables and residuals into reusable products (e.g., plastic blocks) or organic fertilizers, and information about these are easily accessible online. These can also contribute to improving solid waste collection systems.

Organizing for clean energy and environmental protection. An organizing strategy can be built around obtaining low-cost solar panels, inverters, and solar batteries, as means to accompany the poor in shifting to renewable energy and, consequently, help households save in electricity bills. This can empower the poor to tap resources from international funding agencies and private sector which “would be more than happy” to support such undertakings in communities especially for those who want to “compensate for their environmental sins.”

Why get involved in climate action? Explaining the spirituality of climate action, Dr Bagadion said that caring for the environment is akin to following what is considered the “greatest commandment” of Jesus: “Love your neighbor as you love yourself.” One can extend the notion of “neighbor” to everything that is “part of the web of life.” The view that regards humans as having dominion over the earth must be abandoned. A biocentric perspective allows one to treat the trees, the rivers, the sky, and everything that makes life possible on Earth as his or her neighbors. Moreover, defending nature against destruction is an act of defending oneself; when trees, bodies of water, the air, and the like are harmed, the human person is also hurt.

During the open forum, the following were cited as examples of community-level climate actions:

While efforts such as recycling may be considered to have limited impact, these are helpful in preventing toxic wastes from going into the seas. For one, garbage contributes to ocean acidification and kills marine organisms that are crucial in carbon sequestration by bodies of water. However, replicating and scaling up these community-based adaptation and mitigation measures is necessary to contribute to managing the risks from climate impacts. Doing this requires addressing some challenges that the webinar participants identified:

Next steps. The UTWG identified three directions for its future undertakings: (1) learning from climate actions spearheaded by other civil society groups (e.g., methane-free waste-to-energy projects, affordable solar solutions); (2) making community initiatives known to a broader audience by documenting and publicizing these; and (3) exploring a “new kind of action plan” that allows the participating NGOs to “extend [themselves] into the larger society” by connecting with the private sector, academe, and students.

About the UTWG. The UTWG is composed of the following organizations: Alternative Planning Initiatives (ALTERPLAN), Community Organizers Multiversity (COM), Foundation for the Development of the Urban Poor (FDUP), John J. Carroll Institute on Church and Social Issues (ICSI), TAO (Technical Assistance Organization) Pilipinas, and the Urban Poor Associates (UPA), and PHILSSA, represented by its national secretariat. Also taking part in the UTWG are Dr Mary Racelis, research scientist at the Institute of Philippine Culture, and Ms Ana Oliveros, former executive director of FDUP and former president of the Social Housing Finance Corporation (SHFC). Dr Anna Marie Karaos of ICSI served as the moderator of the first learning session.

This activity was supported by the Coastal Cities at Risk: Investing in Climate and Disaster Resilience in the Philippines (CCARPH), a transdisciplinary action research project implemented by the Ateneo de Manila University and Manila Observatory, in partnership with the National Resilience Council, with the support of the International Development Research Council (IDRC, Canada).