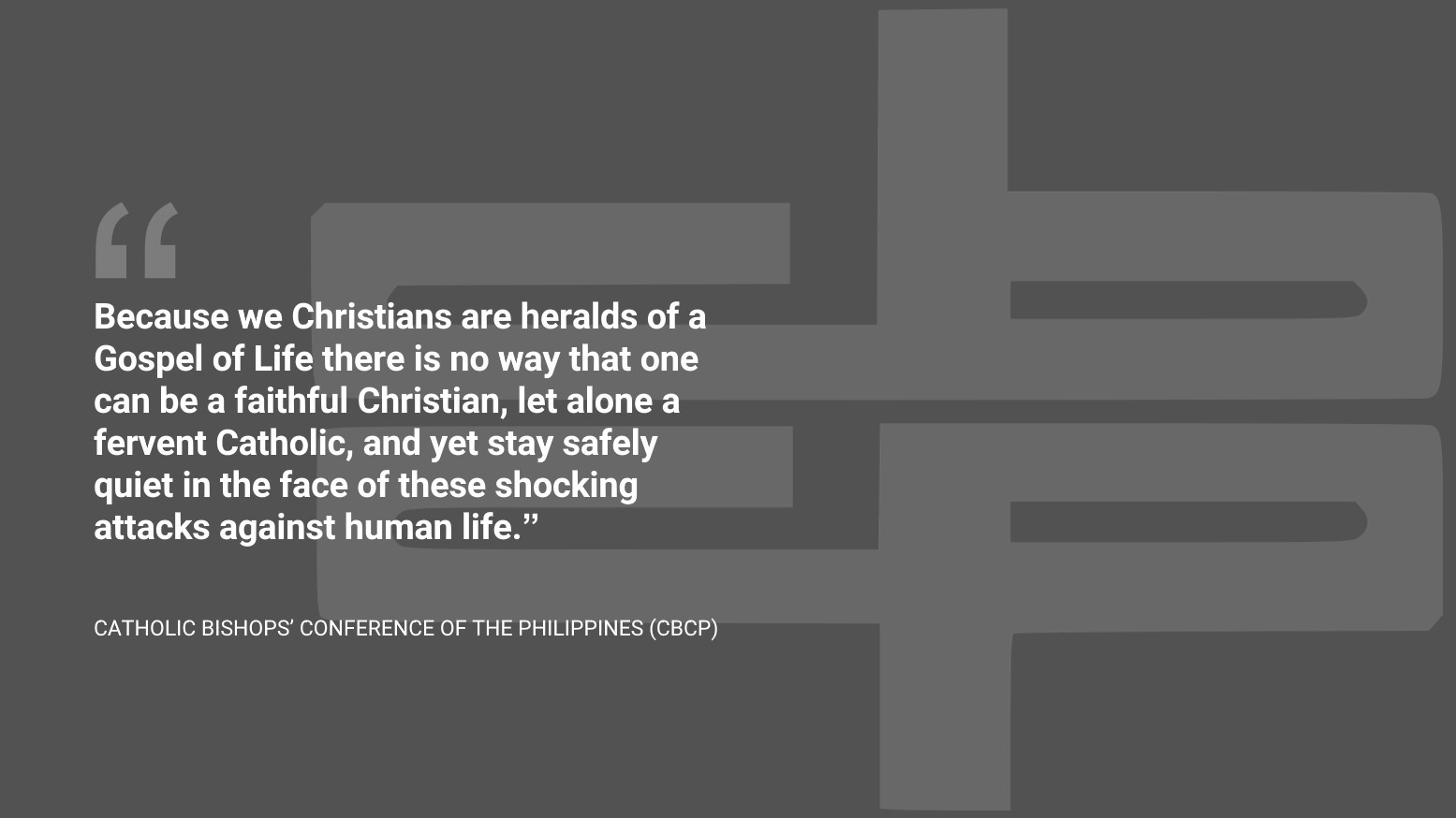 CBCP: In the name of God, stop the killings!

Our brothers and sisters in Christ:

Kian, Carl, Reynaldo…they were young boys, enjoying life, loving sons of parents who doted on them. Now an entire nation knows them by name because their lives have been snuffed out so cruelly, their dreams and aspirations forever consigned to the sad realm of “what could have been but never will be”.

They cannot be statistics, for to reduce them to numbers in an increasing tally is to heap yet more injustice than has already been visited on them. They are only three of so many, awfully many, who have paid the price of what is touted to be the country’s resolute drive against criminality!

We mourn. The nation must beat its breast in a collective admission of guilt for in our silence and in our inaction, in our diffidence and in our hesitation lie our complicity in their deaths!

We are appalled by the remorselessness by which even the young are executed. The relentless and bloody campaign against drugs that shows no sign of abating impels us your bishops to declare:

For the good of the country, stop the killings! The toll of “murders under investigation” must stop now.

For the sake of the children and the poor, stop their systematic murders and spreading reign of terror! In memory of those killed, let us start the healing of our bleeding nation.

The healing must begin. Malasakit must be restored. Pakikiramay must be active. Pakikipag kapwa tao must be gained back. The rule of law must prevail.

Because we Christians are heralds of a Gospel of Life there is no way that one can be a faithful Christian, let alone a fervent Catholic, and yet stay safely quiet in the face of these shocking attacks against human life. The very Gospel that the Church was founded to teach is a Gospel of Life. The Church must either be at the forefront of the intense and fervent struggle against a culture of death or the Church betrays Christ.

Brother kills brother. Like the first fratricide, every murder is a violation of the “spiritual” kinship uniting mankind in one great family, in which all share the same fundamental good: equal personal dignity.…

Cain’s killing of his brother at the very dawn of history is thus a sad witness of how evil spreads with amazing speed: man’s revolt against God in the earthly paradise is followed by the deadly combat of man against man. (EV, 8)

When we label members of our society because of the offenses they commit – or that we impute rightly or wrongly against them – as “unsalvageable”, “irremediable”, “hopelessly perverse” or “irreparably damaged”, then it becomes all the easier for us to consent to their elimination if not to participate outright in their murder. We stand firmly against drugs and the death drugs have caused, but killing is not the solution of the problem.

The mercy of the Good Shepherd who leaves the ninety-nine in search of the lost sheep is the only reason why we are still here—awa ng Diyos. The “mandate” to kill the lost sheep is poison for humanity. The wounded need healing, not more blows, and the fallen need our hands to be able to rise again, not our feet to trample on them.

We your bishops call for pakikiramay, pakikipagkapwa-tao and malasakit in action; the action to which we bid you all is utterly Christian. It is the most powerful weapon in our arsenal – the action of prayer.

1. We invite you to offer prayers particularly for those killed in the government’s campaign against drugs, as well as for all victims of violence and the war in Marawi, in our country for a FORTY DAY period, starting SEPTEMBER 23 and ending on NOVEMBER 1. Please offer the rosary daily for the killed and receive Holy Communion as an offering for their souls. May the souls of the killed find rest. Prayer heals us. Prayer helps their souls.

2. Subject to the approval of the diocesan bishops, we appeal for the pealing of church bells at 8:00 pm during the same forty day period in remembrance of the souls of those killed. The ancient pious tradition of De Profundis is worth restoring. Let the bells call us to pray for the dead.

3. One beautiful Filipino custom observed in prayerful remembrance of the dead is the tirik ng kandila sa patay. So we urge our Filipino Catholics, during this same 40 day period, to light candles in front of their homes, in cemeteries, in public places, and particularly, at spots where the victims of the on-going violence have been felled and have lost their lives, while praying for them and for their families. Candle lighting can soothe grieving hearts.

We intend to offend none but the evil in our midst. We are angry at none but the indifference amongst us. We fight the darkness not with spark of bullets but with the light of Christ. We beg for prayers and we ask for a change of heart in all of us.

Let us turn once more to God, for they who put their trust in bullets and weapons will be confounded. But upon the nation that turns to God and prays, God promises the healing of the land and the calming of the storms that rage in our hearts.

For the Permanent Council of the Catholic Bishops’ Conference of the Philippines, Intramuros, Manila, September 12, 2017