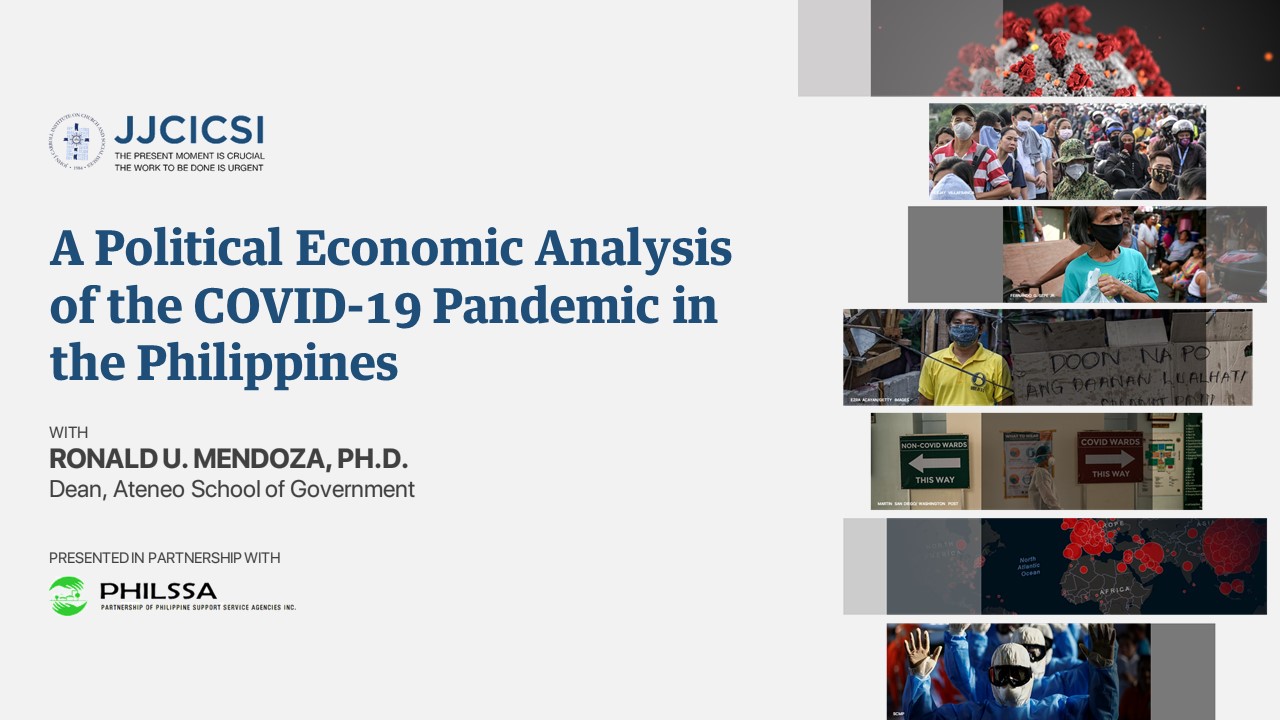 The enormity of the crisis brought about by the COVID-19 pandemic invites reflection on the critical role of government in steering the behaviors and interests of people in a direction that would be conducive to meeting the challenges of the situation. The Philippine government has been roundly criticized for its lack of preparation and responsiveness in managing the effects of the pandemic and their implications to various sectors of society, especially the poor and vulnerable. Even after more than three months of lockdowns at various levels, the Philippines has yet to flatten the curve of COVID-19 cases.

Presenting some of the evidence and insights in several papers published in various online journals, Dr Ronald U Mendoza, Dean of the Ateneo School of Government, shared his analysis on the current situation to the partner organizations and individual collaborators of the John J Carroll Institute on Church and Social Issues (JJCICSI) last June 19. The online forum was participated in by 12 NGOs working with sectors such as the urban poor, children, farmers, and fishers. Organized with support from the Partnership of Philippine Support Service Agencies (PHILSSA), the forum sought to share insights and analyses on how governance would be like under the so-called “new normal” given the social, financial and political pressures the government must contend with and the 2022 national elections on the horizon. A better understanding of how political leaders and institutions are likely to behave in this political-economic climate would help NGOs in focusing and adjusting their advocacy goals and strategies so that these could lead to empowering outcomes for the poor and marginalized sectors.

What the crisis has revealed

Dr Mendoza likened the responses that governments have taken to either an axe or a scalpel.  He said that the Philippine government opted to use an axe (i.e., draconian lockdown measures) that has resulted in high socio-economic costs—increased hunger, rise in unemployment, and interruption in children’s education – in its effort to stop the spread of the disease. Governments in societies without strong institutions and social safety nets as well as “nuanced” response capabilities to contain the spread of COVID-19 through “test, trace, and treat” resort to using this approach. Struggling to get ahead of the coronavirus, the Philippines, according to Dr Mendoza, is “facing potentially a deep economic downturn for 2020.” The crisis has exposed deep-seated social divisions in Philippine society, as some segments of the middle class, also affected by the pandemic, questioned the concentration of government aid to the poor, and this is “not a good sign of social cohesion.”

The mismatch of central government policy and local reality on the ground is also glaring. Dr Mendoza cited several examples such as the number of stranded urban workers when lockdown measures were relaxed, the  continuing ban on public transportation , the poorly handled distribution of cash aid in some areas where recipients waited in tight queues that violated social distancing protocols, and public school teachers moving to higher grounds to get internet connection to be able to participate in government-promoted online seminars. “If the policy does not adjust to capture [those on the ground], they would be marginalized… [There are signs] of possible political risks if the people are not supported,” he stressed. “Political fissures” rising from frictions between and among national government officials are also troubling signs that complicate the already inadequate response of government to COVID-19.

Recovering from the crisis and emerging into a new normal require the generation and use of sound data and information, focusing on strengthening the healthcare and social protection (specifically health insurance) systems, strong public-private partnerships to create jobs and sustain economic growth, and building citizens’ trust and confidence in institutions through transparency. Citing the experiences of neighboring countries such as Thailand, South Korea, and Taiwan, Dr Mendoza said that evidence points to an opportunity to strengthen government’s crisis response by not just “build, build, build,” but by “building back better.”

The last part of his presentation enumerated some of the components of a health sector- anchored recovery. These include using technology (for rapid testing and tracing, information sharing, telemedicine), building citizens’ trust in government (compliance with quarantine measures and willingness to share information), and transforming “brick and mortar” health system to expand coverage of health safety nets. The support provided by the private sector in “dramatically [upgrading] test, trace, and treat” systems and by the development sector in gathering evidence and extending technical expertise to government offer hope in this rather bleak situation.

Given the track record of the administration in allowing civil society participation in governance, he challenged NGOs to look for ways to “get their advocacies strategically across” by forming broad coalitions unifying around the most needed response, matching criticisms with proffered solutions, and reaching out to the business sector. The civil society sector must influence the recovery plan of the government and deployment of resources for addressing the impact of the pandemic to prioritize inclusive recovery (i.e., health insurance, social protection) rather than the government relying on the “trickle-down” effect of massive infrastructure projects under the “Build, Build, Build.” “You can actually set aside a bridge, you can set aside a road, but you cannot set aside [a child’s education],” he said. Building the capacity of communities to recover from the crisis can be strategically pursued at the local government level, which will have a paramount role in establishing a “test, trace, and treat” strategy and system and in preventing the economy from failing.

Meanwhile, the religious sector, having played an active role in crisis response, has been given a “golden opportunity” to “signal to the entire country that it is a real partner for pragmatic, practical responses that matter to many Filipinos… and for accountability.”

In the run-up to the 2022 national and local elections, the message of good governance will be showcased, which is especially critical given the rising unemployment, a polarized environment, and spiraling optimism among Filipino voters. “Politically, it is going to be charged. And they [government] must know that we are watching. They must know that we understand what they are doing,” he explained. The situation offers an opportunity to highlight leaders who did well during the time of crisis.

The organizations that participated in the online forum included national networks of NGOs such as the Caucus of Development NGO Networks (CODE-NGO), Philippine-Misereor Partnership, Inc. (PMPI), Philippine Partnership for the Development of Human Resources in Rural Areas (PhilDHRRA), and PHILSSA. Long-time partners in the work of JJCICSI were also present: Save the Children Philippines, Alternative Planning Initiatives (ALTERPLAN), Foundation for the Development of the Urban Poor (FDUP), Community Organizers Multiversity (COM), Kaisahan Tungo sa Kaunlaran ng Kanayunan at Repormang Pansakahan (KAISAHAN), and the Institute of Philippine Culture (IPC) of the Ateneo de Manila University. From the Church sector were the Sangguniang Laiko ng Pilipinas and the Archdiocesan Institute for Research and Development (AIRD) of the Archdiocese of Manila.