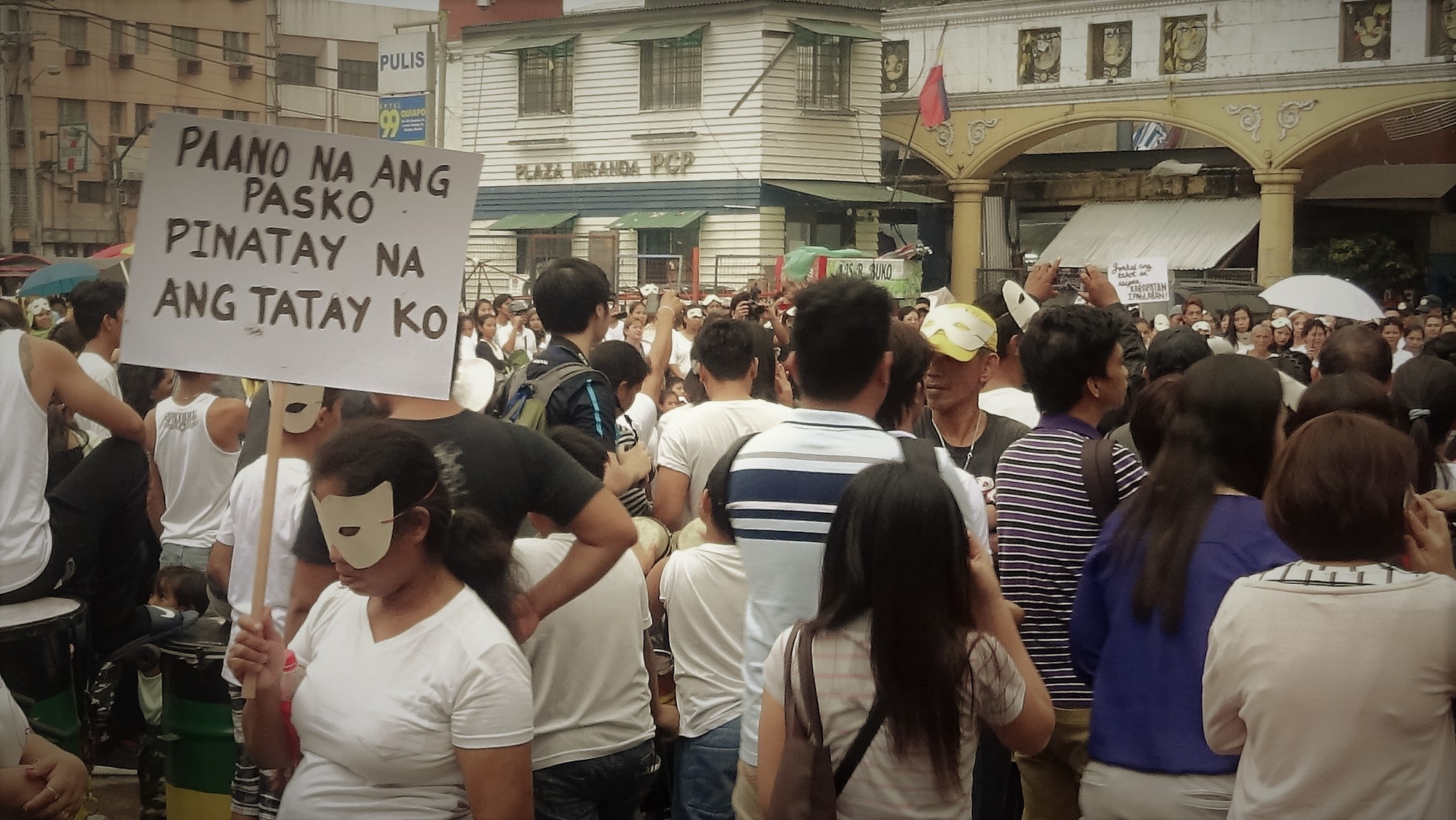 Worse than the Grinch

“Paano na ang Pasko? Pinatay na ang tatay ko (What will Christmas be like? My father has been killed),” said one placard at the “Panunuluyan ng Maralitang Tagalungsod,” an annual tradition of urban poor groups reenacting the search of Mary and Joseph for a place where Jesus might be born.

Eleven days before Christmas, thousands from poor communities, as close as Estero de San Miguel in Manila to as far as the resettlement sites in Bulacan, marched from Liwasang Bonifacio to Plaza Miranda under a pale, gloomy sky. Instead of focusing on the usual parallelism between the Holy Family’s journey and the urban poor’s difficult search for decent housing and secure tenure, this year’s “Panunuluyan” highlighted an issue that has been hitting the urban poor the hardest, literally and figuratively—the bloody and unrelenting “war on drugs” launched by the new administration.

The “war on drugs” is the new Grinch in town. It has stolen Christmas from fathers, mothers, wives, husbands and children by killing their kin. As “Oplan Tokhang” swept through poor communities, the Grinch left behind hundreds of widows, orphans and devastated families. But unlike in the classic children’s story where the grumpy character, after feeling a tinge of remorse, returned all the things he had stolen from the Whos, the lives claimed by the state-led crackdown on narcotics cannot be returned.

It is not, however, just about orphaned children having a bleak Christmas. It is about the devastating impacts of this war, and the terror that comes with it, on those at the fringes of society. The war on drugs is a war on the poor.

The community leaders who spoke at the program of the “Panunuluyan” reiterated that the poor are not against the administration’s resolve to eliminate the drug problem. It is a menace that, they acknowledge, is ruining their families and communities. But the urban poor face issues more pressing than illegal drugs—hunger and poor health, unavailability of decent and gainful work, lack of education, and the constant threat of eviction. These everyday problems are the reasons why some of the poor peddle or use drugs. Tackling poverty and inequality together with the poor will thus effectively discourage them from turning to drugs.

The street play that followed portrayed Mary and Joseph looking for a room in a poor community. They were offered three rooms, but behind the doors were things that no mother would want her child to be surrounded with—violence, fear, and distrust. Mary and Joseph refused to enter any of the rooms. In the story, the drug war reached the fictional neighborhood. As in real life, the disregard for the rule of law and due process in the conduct of Oplan Tokhang gave rise to a cycle of violence. Fear gripped the people. Parents had never been more anxious. Community solidarity was replaced by distrust and suspicion, because reaching out to friends suspected of using or trading drugs might land one on the “kill list.”

Discouraged by what she has heard and witnessed, Mary wanted to delay the birth of Jesus. But the three wise men, having finally found the couple they’ve been looking for, tried to reassure and encourage the mother to let the child be born. Instead of precious gifts for the King, they gave Mary the gift of courage, and the community the gifts of peace and solidarity. For indeed, without any wealth and influence, the poor can only rely on courage, peace, and unity to not let themselves be defeated.

The Grinch in our midst is worse than the mean fictional character, but can it still redeem itself? Should people trust human messiahs who promise to solve their problems while sacrificing the poor and powerless? As underscored by the “Panunuluyan,” the story of Christmas offers believers courage and hope. The Gospel comforts and reassures them: “By the tender mercy of our God, the dawn from on high will break upon us, to give light to those who sit in darkness and in the shadow of death, and to guide our feet into the way of peace” (Luke 1:78-79).