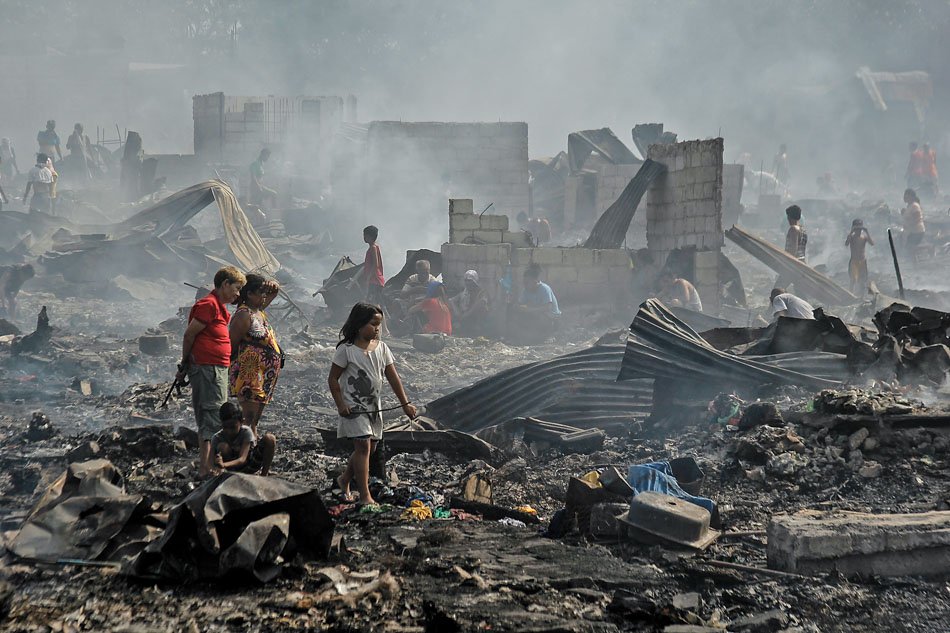 Victims of fire and social neglect

Market 3, a densely populated community on a small block of land inside the Navotas Fish Port, is no stranger to tragedies, like the fire that swept through the homes of more than 700 families before the day broke on Oct. 18.

When I visited the area to hand to one of the community organizations there a small amount it had requested from a partner nongovernment organization for school supplies for children and for undergarments for elderly women, Market 3 was reeking of desperation. Bereft of their few possessions, families have been sleeping rough. Children could not go to school because they help carry construction materials or fetch water from a tanker; the younger ones, with faces smudged with dirt, watch as their fathers set up wooden posts and their mothers prepare their meal with the relief goods they received from donors. It was impossible not to be moved with pity, sadness and anger by such a sight.

It was almost a week after the incident, but many residents had managed to build makeshift dwellings with used tarpaulins and sacks, some pieces of lumber and galvanized iron sheets, as well as salvaged materials from the burnt ruins of their homes. It was a strategy, I was told. One community leader explained that if they did not return to the site and put up temporary shelters—even if that meant tearing down the concrete wall surrounding the area to create a passageway—the management of the fish port and the city government would cordon off the area and let the people fend for themselves in the streets.

Another community leader said residents believe that authorities want to drive them out of the fish port and that the fires, which have regularly hit Market 3, are used against them. Stories that the blaze was deliberately set to clear the area of illegal drugs were also circulating.

Fires in informal settlements such as Market 3 are so common that finding out the real cause of the fire is the least of the concerns of affected residents. Besides, investigations of incidents in such areas are rarely thorough, and news reporters make do with the “probable causes” that officials offer, such as faulty electrical connections and unattended stoves. Having very little to begin with after losing almost everything, fire victims prefer receiving anything that can fill their stomachs and put a roof over their head, at least until their situation starts limping back to normalcy. It is thus understandable that they would welcome even the most self-serving politicians who bring boxes of instant foods, school bags and, the most important for the victims, cash.

But informal settlers, especially the organized among them, are aware that material aid in times of calamities can only sustain them for so long. Adequate and safe housing that is close to their sources of livelihood and income, as well as their children’s schools, is what they need. For years, Market 3 residents, who mostly depend on informal jobs available in the fish port, have been asking the government, specifically the Philippine Fisheries Development Authority (PFDA), to allow them to stay in the area and help them develop it into a formal settlement with housing and proper facilities and services. They are even open to living in low-rise residential buildings so that there would be open spaces and enough access roads.

Under the Aquino administration, initial talks between the PFDA and the National Housing Authority were facilitated by the Department of the Interior and Local Government, then headed by the late propoor former mayor of Naga City, Jesse Robredo. Unresolved legal issues on land classification and utilization, however, stalled the negotiations. It is also not unlikely that vested interests came into play. Market 3 residents have been asking the government to resolve these issues, but nobody seems to be listening. Instead, authorities have been threatening them with eviction.

The fire victims in Market 3 still need all the help they can get, but their situation—and that of hundreds of thousands of urban poor in fire-prone areas—requires longer-term solutions. They need a place where they can live with dignity and security. If the government can purchase an unnecessary jet at colossal sums of money, it can surely afford to provide land and decent housing to informal settlers. If we, as a society, can indulge in useless celebrity gossip as a matter of habit, we can also take the time to lend our voice to the cause of those whom we have long neglected through our collective indifference and inaction.