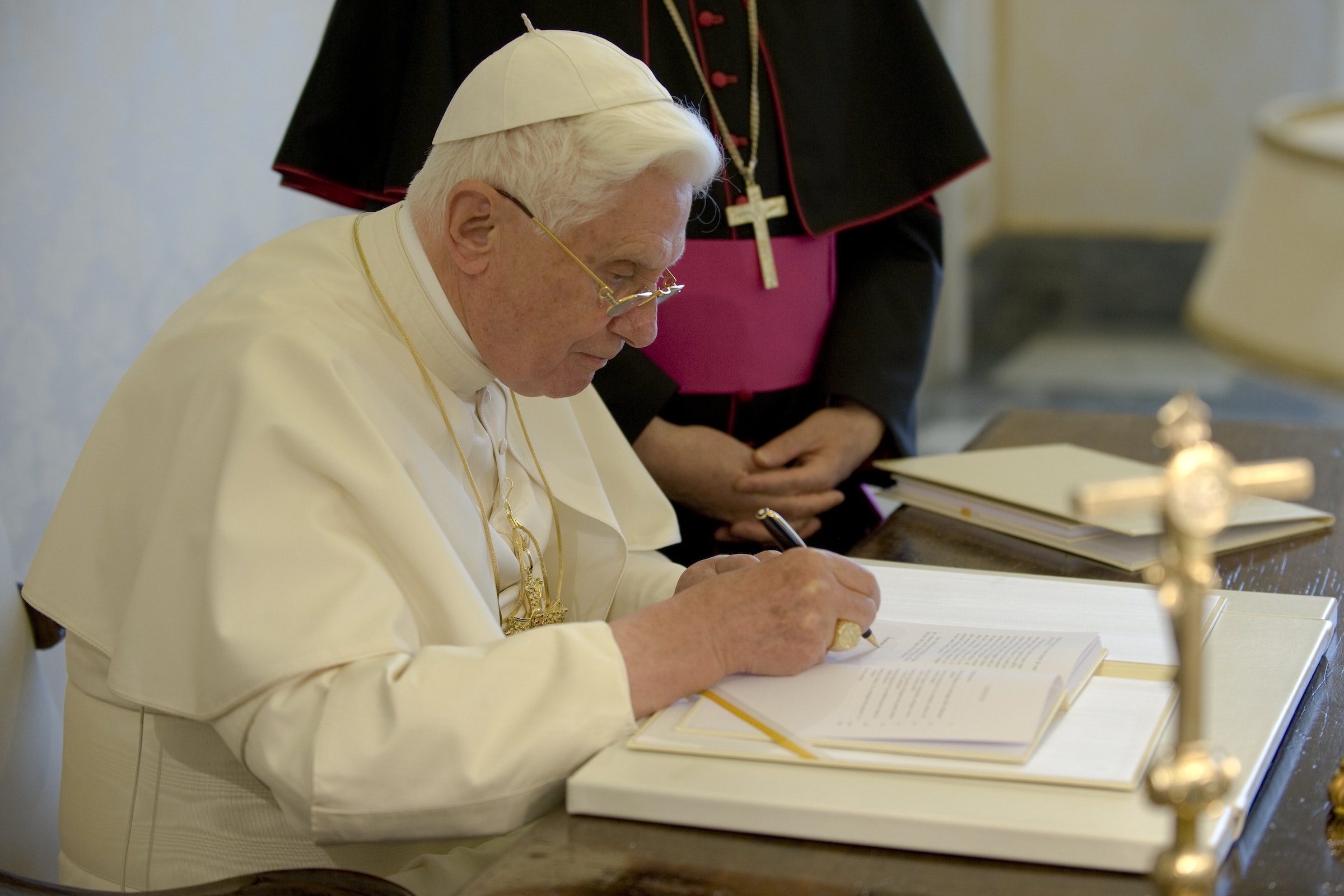 From The Archive: Things Both New and Old

In this article written for the Intersect in 2010, the late Fr. John J. Carroll, SJ gave a succinct background on the social encyclical of Pope Benedict XVI published in 2009, Caritas in Veritate. Fr Carroll recalled the main ideas proposed in previous encyclicals but pointed out that the pope espoused something new and rather radical at the time. Going beyond rights and duties, Fr Carroll said Pope Benedict XVI encouraged more acts of giving and forgiving, reminding us that all is gift. On December 31, 2022, Pope Emeritus Benedict XVI died in a monastery in the Vatican at the age of 95.

Like the householder described by the Lord in Mt. 13:52, Pope Benedict, in his first social encyclical, brings out from his storeroom “things both new and old” and applies them to some of the most crucial problems faced by the world today. Originally intended to be issued on the 40th anniversary of Pope Paul VI’s encyclical “On the Progress of Peoples” (1967), it was delayed in order to incorporate specific reflections on the financial crisis which has upset the lives and livelihoods of billions of people in wealthy nations as well as poor.

Chief among the “old” things which Benedict has brought forth from his storeroom are the two concepts which give the encyclical its name, namely, charity or love, and truth. The former recalls Benedict’s very first encyclical, “God is Love.” The second likewise rings a bell, as part of the title of Pope John Paul II’s encyclical “The Splendor of Truth” (1993). The two together, the Pope insists, are necessary for development which is fully human. Love provides the driving force – the motor if you wish – and truth, the steering wheel, guides us to a form of development which incorporates both justice and the common good.

However, love goes beyond justice, and Benedict brings in concepts which may not be entirely new but are new in the emphasis which this encyclical gives to them, namely gift and gratuitousness.

On the one hand, charity demands justice: recognition and respect for the legitimate rights of individuals and peoples. It strives to build the earthly city according to law and justice. On the other hand, charity transcends justice and completes it in the logic of giving and forgiving. The earthly city is promoted not merely by relationships of rights and duties, but to an even greater and more fundamental extent by relationships of gratuitousness, mercy and communion (No. 6).

The notion of gift had been used by Pope John Paul II in the encyclical “On Human Work” (1981), where he applies it to natural resources.

In every phase of the development of his work man comes up against the leading role of the gift made by “nature,” that is to say, in the final analysis, by the Creator. At the beginning of man’s work is the mystery of creation (No. 12).

Benedict goes further, reminding us that our very selves are gifts (No. 68), and that therefore, gratuitousness must give color to all human actions and institutions, including economic ones.

The great challenge before us, accentuated by the problems of development in this global era and made even more urgent by the economic and financial crisis, is to demonstrate, in thinking and behaviour, not only that traditional principles of social ethics like transparency, honesty and responsibility cannot be ignored or attenuated, but also that in commercial relationships the principle of gratuitousness and the logic of gift as an expression of fraternity can and must find their place within normal economic activity. This is a human demand at the present time, but it is also demanded by economic logic. It is a demand both of charity and of truth (No. 36).

The Pope insists that this spirit must infuse all economic activity, that its absence has hardened exchange transactions to the point where the profit motive freed from all restraint has wreaked havoc on the economy. He repeats the traditional, but often neglected, Catholic teaching that an important duty of the State is to redistribute wealth or income in favor of the poor (No. 39), while insisting that government action alone is not enough.

Thus, he commends at some length business enterprises which fall midway between the “for-profit” and the “non-profit” type, and urges that space in the economy be provided for them (No. 38). These are enterprises which are oriented toward profit, but profit which is devoted to social development. This brings to mind the foundations which corporations have set up in the interest of corporate social responsibility, to carry out development projects. It seems probable, however, that his immediate inspiration is the Economy of Communion movement which draws its own inspiration from the Focolare Movement. This is a worldwide network of some 750 enterprises which divide their profits three ways: part for the growth of the enterprise, part for educational programs and seminars intended to spread the movement, and part for direct social development projects.

The notion of gift also frames Benedict’s discussion of the environment.

Today the subject of development is also closely related to the duties arising from our relationship to the natural environment. The environment is God’s gift to everyone, and in our use of it we have a responsibility towards the poor, towards future generations and towards humanity as a whole. When nature, including the human being, is viewed as the result of mere chance or evolutionary determinism, our sense of responsibility wanes. In nature, the believer recognizes the wonderful result of God’s creative activity, which we may use responsibly to satisfy our legitimate needs, material or otherwise, while respecting the intrinsic balance of creation (No. 48).

Within this framework he discusses not only duties to the environment in general but also specific issues including water and energy, globalization, technology, climate change, and the sharing of the costs incurred by damage to the environment. He also takes the occasion to integrate Catholic teaching on the right to life with the wider concept of human ecology:

If there is a lack of respect for the right to life and to a natural death, if human conception, gestation and birth are made artificial, if human embryos are sacrificed to research, the conscience of society ends up losing the concept of human ecology and, along with it, that of environmental ecology. It is contradictory to insist that future generations respect the natural environment when our educational systems and laws do not help them to respect themselves. The book of nature is one and indivisible: it takes in not only the environment but also life, sexuality, marriage, the family, social relations: in a word, integral human development (No. 51).

There is more, far more, that can be said of the encyclical: for example, on the current inflation of and overemphasis on rights, particularly individual rights, and deemphasis on duties (No. 43), at the cost of the whole conceptual system on which rights themselves are based. Benedict touches on the whole gamut of development issues, many of them very relevant to the Philippines today. For example, in No. 27 the Pope writes:

…the question of equitable agrarian reform in developing countries should not be ignored. The right to food, like the right to water, has an important place within the pursuit of other rights, beginning with the fundamental right to life. It is therefore necessary to cultivate a public conscience that considers food and access to water as universal rights of all human beings, without distinction or discrimination.

The Pope or his advisors are clearly well-informed on these issues and on approaches to dealing with them. In fact, one of the complaints made about the encyclical is that it has tried to touch on too many issues and so at times loses coherence. But space is limited and the document is well worth reading and studying in its entirety.

Before concluding, however, I would like to mention one issue on which the treatment seems to be inadequate, that of population growth (No. 44). While mentioning the “problems with population growth”(emphasis in the original) and the importance of responsible procreation, and justly critiquing programs of government and non-government organizations to promote abortion, sterilization and contraception even without the consent of the women involved (No. 28), the encyclical downplays the negative impact of rapid growth on economies such as the Philippines, while emphasizing the negative impact of a birth rate which is too low. It would perhaps have balanced the discussion if Benedict had quoted the encyclical “On the Progress of Peoples” (No. 37) on this point:

It is true that too frequently an accelerated demographic increase adds its own difficulties to the problems of development: the size of the population increases more rapidly than available resources, and things are found to have reached apparently an impasse. From that moment the temptation is great to check the demographic increase by means of radical measures. It is certain that public authorities can intervene, within the limit of their competence, by favoring the availability of appropriate information and by adopting suitable measures, provided that these be in conformity with the moral law and that they respect the rightful freedom of married couples

However, that is another matter, and so I conclude with the words of the Holy Father, from the conclusion of the encyclical.:

The greatest service to development, then, is a Christian humanism that enkindles charity and takes its lead from truth, accepting both as a lasting gift from God. Openness to God makes us open towards our brothers and sisters and towards an understanding of life as a joyful task to be accomplished in a spirit of solidarity (No. 78).

Published in From The Archive

Comments are closed, but trackbacks and pingbacks are open.