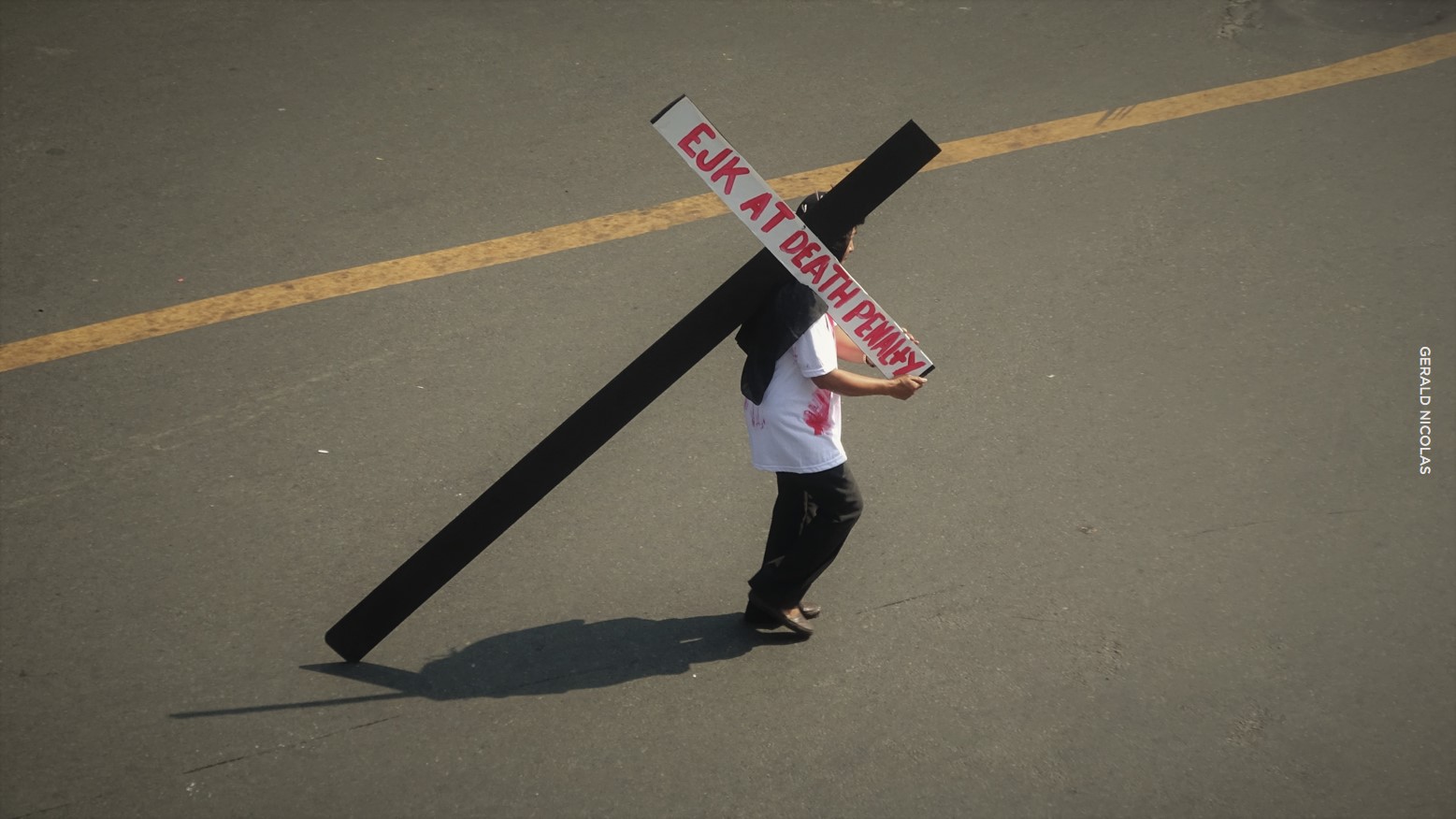 Shepherding When the Sheep are Being Slaughtered

About a year ago, on May 9, 2016, the Filipino people–or at least, 16 million of them, about 39 percent of the electorate–entrusted our nation to a strange shepherd.

President Rodrigo Roa Duterte came to power promising to protect the innocent by spilling the blood of the guilty: criminals, especially drug traders, but also drug users.  The carnage began to be reported soon after he was elected, a month and a half before his inauguration.  Police apparently took his exhortations to “shoot to kill” drug suspects as official permission to use their guns liberally, even while another president was still at the helm, stunned into greater inaction than usual. In the run-up to Duterte’s inauguration, the Philippine National Police (PNP) triumphantly announced a rising body count, wanting to prove to the incoming president that they were totally with his program. The numbers were greatly augmented by vigilante-style executions, similar to those in Davao City during years that Duterte was its mayor. The night of his inauguration, speaking to urban poor residents of Manila, Duterte himself endorsed such killings, urging his listeners to snuff out neighbors they knew to be drug users.

From July 2016, the first full month of Duterte’s administration, to the end of April, the dead have been unofficially estimated at over 9,000, an average of 900 for each month Duterte has been in office. Most are poor. At least some are innocent beyond a doubt. “Collateral damage, and I’m sorry,”  shrugs the president.  The PNP has taken responsibility for 2,500 of these deaths, claimed to have occurred when suspects fought back, although the number of supposed resisters is curiously unprecedented. The rest the PNP calls “deaths under investigation.” But in common conversation, Filipinos call them “extrajudicial killings,” or “EJKs,” even though the term “extrajudicial killing” more correctly refers to executions without trial by state forces.

This confusion of terms reflects the general confusion about who is responsible for those deaths under investigation. Even President Duterte’s publicity team seemed confused when they produced a video celebrating the administration’s “Fifty First Days” (an awkward, unidiomatic title that may have been a facetious if not terribly tasteful riff on the movie “Fifty First Dates”). In one ghastly segment of that video, vigilante-style killings, indicated by cardboard signs over bodies proclaiming “I am a drug pusher [or user]; don’t be like me,” appeared in a series of photographs and footage trumpeting the campaign against drugs as the administration’s proudest achievement. There have been reports that some of the unknown killers are police, or in the pay of police, and that police themselves are paid per body, with a graduated system of rewards depending on the value of the target–small drug pushers and users being the cheapest, at about $400. Of late, as the outcry against the killings grows louder, the PNP have taken pains to distance themselves from the “deaths under investigation,” and have stopped announcing those numbers.

Still, the outcry is coming not from the majority of the Filipino people–at least, if public opinion surveys by reputable local research organizations such as the Social Weather Stations (SWS) are to be believed–but from a small core of Catholic and human rights advocates, and from liberal democratic governments. The Catholic and human rights advocates have managed, for now, to gain the support of the Catholic Bishops’ Conference of the Philippines (CBCP), currently headed by Archbishop Socrates B. Villegas, who has spoken against the killings, from the beginning, and who last January presided over the approval of a CBCP pastoral letter denouncing the bloodbath.

Yet the majority of Filipino Catholics seem not to be in a denunciatory mood.  The Philippines is 81 percent Catholic. But only 12 percent of respondents in the March 2017 SWS survey have declared themselves dissatisfied with the campaign, and among those, it is quite likely that some are not Catholic, and that some, Catholic or not, are dissatisfied because the campaign is not deadly enough.  It is true that the percentage of the dissatisfied has risen from 8 percent, and the percentage of the satisfied fallen from 85 to 78 percent, between December 2016 and March 2017.  Nonetheless, for the administration to brag that its campaign against drugs still has the approval of four out of five Filipinos is not just an instance of the president’s much-celebrated hyperbole.

Under these circumstances, there has been some debate in the Catholic Church, even within the CBCP, over what should be done–at least, among that apparent minority who think that anything has to be done. One way to put the question under debate is: How do we best shepherd the flock when they seem not to recognize our voice, when they seem to respond better to the voice of other shepherds?

One side expresses fears that too strident opposition to the campaign would alienate the majority of Catholics who apparently support it.  Now, people on this side say, is the time for the Catholic Church in the Philippines to be humble, to stop making statements that appear partisan, to stop telling the faithful or the government what to think or do, and to do much more than it says.  These Catholics, although they disagree with the methods of the campaign against drugs, claim that the prudent course of action is not to criticize openly, but quietly to work with drug users on rehabilitation, and with small-time drug traders on alternative livelihood programs. Once those programs are proven to work, they say, we can show these to the government and claim “There is no need to kill.”  But until then, perhaps even then, the Church’s best bet is to suppress criticism.

Those who cannot be silent acknowledge the necessity of forging alternative solutions to the drug problem–not so much because there is hope the administration will listen, but because it is part of a shepherd’s duty of nurturing and defending the flock. But they also argue that it is not the viability of these solutions, or even the Church’s engagement in them, that gives the Church the right to speak against the killings. To speak, they say, is a moral obligation that proceeds from the Father’s mercy.  Not to speak is to betray that mercy. Not to speak is to send a message to the flock that it is all right to sacrifice the sheep who are sinners, so that the supposedly innocent sheep might flourish. Not to speak is to immerse oneself in the blood of that horrendous sacrifice.

I must confess that in the particular context of the violence that now grips my country, I am firmly on the side of those who do not wish to remain silent. I call them the “ethical shepherds,” after Max Weber’s distinction between ethical prophets, who preach moral truths and denounce those who do not measure up to them, and exemplary prophets, those who gently teach by example.  In this Sunday’s first reading from Acts, Peter, emboldened by the Holy Spirit, is the ethical shepherd when he stands before the house of Israel, accusing them of complicity in Jesus’ death, urging them to “repent and be baptized … in the name of Jesus Christ for the forgiveness of your sins,” and exhorting them to save themselves “from this corrupt generation.”  When I proclaim that passage at my parish this weekend, I will be thinking with gratitude of our brave lay people, religious, priests, and bishops who have already spoken against the killings, and who do not intend to stop until the killings do.

But while I consider ethical shepherding absolutely necessary in this extreme time in my country, the need for exemplary shepherding is so great that there is more than enough room for those who prefer to minister quietly to the sheep than to preach to them.  For the flock is in tremendous need of tender ministry at this time.  Drug users and pushers and petty offenders and innocent inhabitants of crystal meth-soaked urban poor communities sleep fitfully, in perpetual dread of the knock on the door at 1AM.  Thousands of families of the slain are traumatized. The presumably upstanding citizens who declare to survey takers their satisfaction with the campaign against drugs also fear that they or someone they know will die in an EJK.  Police officers are tormented with guilt at their participation in the killing, or demoralized at the transformation of the PNP into a merciless murder machine.

For these, perhaps no better shepherding can be done than the exemplary shepherding of Jesus, described, also by Peter, in the second reading. It is a shepherding of accompaniment and solidarity, which requires no small courage. And so when I proclaim that passage at my parish this weekend, I will thank God for the intrepid lay people, religious, priests, and bishops who counsel and provide refuge and rehabilitation for drug users and their families. For those who track down the families of the slain in order to help them document the killings, retrieve and bury the bodies, obtain trauma counselling, get back on their feet, send their children to school, and muster the strength to file charges against the killers. For those who dialogue patiently and kindly (in a way I never can) with those clinging stubbornly to the strange shepherd’s promises. For those who give recollections to the police and listen to their stories.

The best shepherding is that which is ethical and exemplary at once.  And so I will be grateful for lay friends and religious congregations of women who form secret networks of sanctuary for fugitives while making public statements against the killings.  For the Redemptorist priests who give money and livelihood to the bereaved families, while an exhibit documenting the deaths grows outside their popular shrine to Our Lady of Perpetual Help, a visible reproach to the murderers and the indifferent.  For Archbishop Villegas and Bishop Pablo Virgilio S. David, who seek out the wakes of victims to give comfort to those left behind, while openly reproving the killers and the uncaring.

But most of all I will be grateful for Jesus, our true shepherd, ethical and exemplary at once.  I doubt he ever made prudent calculations as to whether he would alienate his followers by proclaiming right and denouncing wrong. He also healed the sick, fed the hungry, forgave sinners, consoled the bereaved, and raised the dead.

I wish that we could raise the dead.  There are far too many of them already in my country. But I trust that if we who grieve those deaths “follow in his footsteps,” as Peter advises the faithful to do, then we too will give life, and give it more abundantly.

This piece first appeared on 5 May 2017 in “It Was the Women Who Stayed“, a parish blog that features the scriptures of the upcoming Sunday.