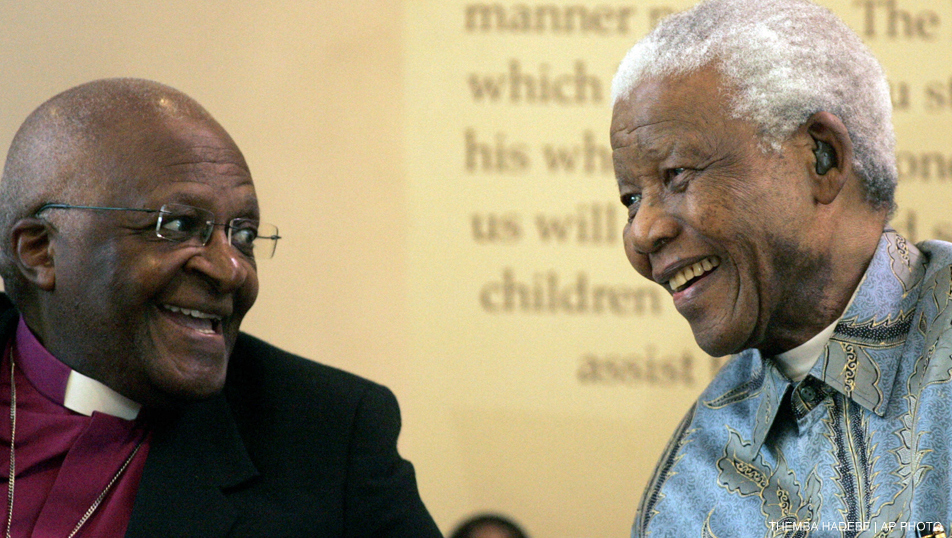 I never had the chance to see Nelson Mandela in person. But I have experienced what is, I suppose, the next best thing. I have listened to Archbishop Desmond Tutu speak.

Ten years ago, Tutu was invited to deliver the keynote address for a peace conference at the Kroc Institute of the University of Notre Dame in Indiana. He was one of the most outspoken opponents of apartheid in his native South Africa, and the campus was abuzz with excitement over the 1984 Nobel Laureate’s visit. I was a first year sociology graduate student in Notre Dame at that time, and I remember arriving an hour before the talk for a chance to squeeze into the packed McKenna auditorium, to get a glimpse of the antiapartheid hero.

Much of what Tutu said that evening has since faded from my memory. But he narrated one anecdote that has been indelibly imprinted on my mind. The incident he recounted provides a good insight into the spirit of the archbishop, and perhaps of Mandela himself.

Tutu spoke at great length about his work as chair of the Truth and Reconciliation Commission (TRC) established shortly after the fall of apartheid in 1994. The purpose of the TRC was to provide a venue where perpetrators of injustice during the apartheid regime could admit their guilt and seek forgiveness from the aggrieved parties. Holding hearings throughout the country, the TRC brought together the oppressors and the oppressed, in the hope that the process of reconciliation could be started.

The archbishop recounted one such hearing where a young girl came face to face with one of her father’s murderers. This girl, barely in her teens, lost her father to a band of paramilitary assassins hired by the government, an all too common occurrence at that time. Years later, one of the killers sought out the young girl to apologize for his role in her father’s death.

The man narrated how he and his fellow assassins drank themselves into a stupor before rounding up the group of black activists, including the girl’s father, assigned to them. The assassins took the activists deep into the forest and summarily shot them despite their pleadings.

But this was not the end of their depravities. Before disposing of the bodies by burning, the assassins decided to continue their drinking party. And to satisfy their hunger, they started cutting strips of the dead men’s flesh, roasting and feasting on these as they drank the night away.

At the end of his grisly tale, the man was reduced to heaving sobs as he begged for the girl’s forgiveness. The girl was silent for what seemed like an eternity. Then, before the stunned audience, the girl broke into tears, embraced the man, and said, “I forgive you.”

Uncommon magnanimity was a common event in many of these hearings, according to Tutu. The hearings were credited for the relatively peaceful transition of South Africa to democratic rule. But the TRC was not without its critics. Political amnesty was offered as an incentive for individuals to publicly admit their crimes and ask for forgiveness. According to those skeptical of the process, the chance for amnesty allowed those who had perpetrated the most heinous crimes to escape prosecution.

While history’s verdict on the capacity of the TRC to bring true justice is still uncertain, what is perhaps the astounding thing is that it was even tried at all. Here we get a profound insight into the spirit of Mandela, whose vision of unity between black and white became the guiding force for postapartheid South Africa. After 27 years of imprisonment, Mandela would emerge “bloody but unbowed” (a phrase from “Invictus,” his favorite poem), dwelling not on the injustices of the past but intent rather on reconciliation. In other words, Mandela left prison with the purity and idealism of the young girl who forgave her father’s killer. He was a man at peace seeking out peace for his land.

After the archbishop’s address, I walked back to my quarters with some fellow graduate students from Uganda, and we had an animated conversation about his insights. I shared with them my own skepticism, telling them that perhaps true reconciliation cannot begin unless there is some form of restitution. One of the students gave a very insightful response. He said that when one has lost loved ones unjustly, it is impossible to restore the lives of the dead but it is possible to make their deaths meaningful and life-giving, which is what the Truth and Reconciliation Commission sought to achieve.

In this season of disaster and despair, the vision of Tutu and Mandela reminds us that wellsprings of hope emerge even in the direst of situations. We can choose to play the blame game, as the political wrangling impeding the postdisaster reconstruction efforts has already shown. Or we can choose, as a people, to emerge from the ruins “bloody but unbowed,” to rebuild not just homes and lives but the nation itself.

Mandela now “belongs to the ages,” as Stanton said of Lincoln shortly after his death. We honor Mandela best by learning from the lessons he has imparted to the ages.