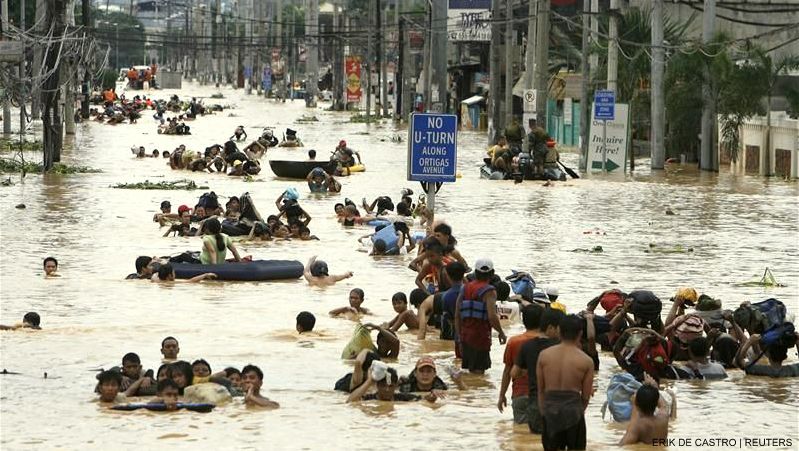 The rainy season has begun, certain to be followed by typhoons and floods. Two episodes of heavy rains and resultant floods in fact occurred in Metro Manila last month. Horrendous traffic followed, commuters were stranded, those who could not wait to reach home waded through the waters, oblivious to the possibility of contracting diseases and infections.

From experience, we can expect another 18 typhoons with strong winds and rains, and similar occurrences of floods and landslides in different parts of the country, which always lead to sickness and destruction of life and property.

It’s interesting how the blame for these yearly adversities can be passed so easily from one to another. We hear private citizens attributing the floods to informal settlers who build their shanties along waterways, preventing the waters from flowing freely out to the sea. Informal settlers hold the government accountable for failing to provide them with proper relocation sites and in-city housing or resettlement programs. Government officials from the legislative and executive branches, whether national or local, throw back the blame to their colleagues for the poor implementation of these housing and infrastructure projects.

Sen. Ferdinand “Bongbong” Marcos Jr., for instance, recently came out with the following statement: “It really boils down to the simple fact that since ‘Pepeng’ and ‘Ondoy,’ we have done absolutely nothing to fix the flooding.” At a Senate press briefing last month, he exhorted the national and local governments to become more proactive than reactive to the perennial problem of flooding. He mentioned the lack of new spillways and pumping stations, as well as of a program of reforestation surrounding the city. Then he said: “We don’t have a proper land use plan. What land use plan we have is not being implemented. We have to understand what every piece of land we have to use.”

Unless the good senator is suffering from occasional or selective amnesia, how can he not remember that he was the one who blocked the passage of a national land use policy in the last Congress?

Senate Bill 3091, also known as the National Land Use Act or NLUA, was ready for third reading in January of this year. During the last week of the Senate sessions and before the campaign period for national and local elections began in February, the bill reverted to second-reading status because Senators Frank Drilon, Bongbong Marcos and Manny Villar expressed their intention to introduce amendments. Senator Drilon dutifully presented his four proposed amendments, which Sen. Gringo Honasan, the Senate champion and main sponsor of the bill, readily accepted. Senator Marcos, on the other hand, begged the indulgence of the body because he and his staff were not ready to present their individual amendments. Senator Villar was nowhere to be found in the session hall.

On the final day of session, it was Senator Marcos’ turn to be absent. Thus, there was no way that the 53 amendments reportedly crafted by real estate development institutions led by the Chamber of Real Estate and Builders Association or Creba, and coursed through Senator Marcos, could be presented. Consequently, Majority Floor Leader Tito Sotto moved that discussions on the bill be suspended for resumption in June.

Land use does not seem to be as controversial as the reproductive health and mining issues, but none of the bills proposing to enact a national land use policy filed since the 9th Congress in 1994 has ever been passed. Both chambers of Congress have always paid lip service to the passage of a national land use policy. In the 15th Congress, more than 70 representatives, or about one-third of the House, coauthored the bill on land use, while practically all the senators authored the Senate version. Yet the bill on a National Land Use Act continues to languish in the legislature, as it has done so for decades, and for the last seven congresses.

Countless lives have been claimed and properties destroyed because housing projects were erected on danger zones, while prime agricultural lands and food production areas were either converted into residential, commercial/industrial use or declared as mining sites. How many more properties and lives will it take and will be sacrificed before the lawmakers come to realize the significance of proper land use?

“We are all in government. We’re all to blame. We should be doing something about it. It will take the effort of many entities to get this right. Let’s fix the problem, not the blame,” Senator Marcos asserted. But he had the chance to fix it in the last Congress—and blew that chance.

The Filipino people hope and trust that along with his colleagues in the Senate, Senator Marcos will help prevent the perennial problems of flooding, outbreak of diseases, loss of life and property from recurring by finally passing the National Land Use Act in this 16th Congress.

Gemma Rita R. Marin is executive director of the John J. Carroll Institute on Church and Social Issues and head of its Rural Development Program.