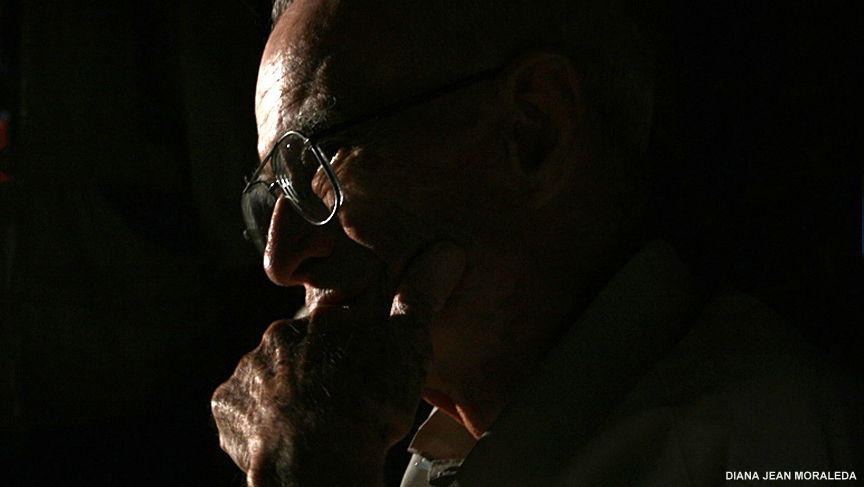 One of the significant graces of my Jesuit life has been having Fr. Jack Carroll as my mentor. After I finished my Masters in Economics, I was assigned to work as an apprentice to Fr. Jack at the Institute on Church and Social Issues. This apprenticeship was conducted simultaneously with my four-year theological studies at Loyola School of Theology (LST). ICSI then had its offices at the ground floor mezzanine of LST and I would go there to work during breaks in-between classes.

When I went for my Doctoral studies, Fr. Jack continued to be my mentor, acting as my contact person in the Province to whom I would make regular reports about my studies and research and he in turn would give advice and counsel. In the course of my long and difficult studies, the one word from him that consoled me was “Courage!” “Courage!,” he would always say after he listened patiently and sympathetically to my stories of struggle and difficulty. Once I was describing to him that what I was going through in my thesis research, number crunching and writing felt like a prolonged extended period of low-key depression. He responded that yes, doctoral research does sometimes feel that you are walking through a long dark tunnel, fatigued and haggard, not sure when you will reach the end. Then you see a light … but you are not sure if it is light at the end of the tunnel or … the headlights of a train that is rushing full speed towards you! Courage!

In Fr. Danny Huang’s beautiful tribute, he praised Fr Jack who “provided lucid and insightful social analysis, informed by deep faith and a profound love for the poor, the model of what the Jesuit intellectual apostolate in the service of faith and justice should be.” Fr Jack was a wonderful mentor. Tonight kindly permit me to share three lessons that Fr Jack taught me.

Lesson No. 1: Social reality is more complex than our theories and social change takes time.

Reality is more interesting than our theories. Fr. Jack was adept at explaining the sociological theories that could shed light on the problems afflicting the poor. But he would acknowledge the uncomfortable facts which the theories could not explain. He would never force the facts to fit the theories. Fr. Jack was always thoughtful and thorough in his analysis. He avoided sweeping generalizations. He was dismissive of conspiracy theories like the one about the Standard Days Method as a CIA plot with Georgetown University to prove that natural family planning does not work. His writing was measured, elegant and to the point. He frowned on ideological sloganeering.

The parable of wheat and weeds from today’s gospel resonates well with Fr. Jack’s perspective on social reality. Weeds and wheat are intertwined, growing together. The good is almost everywhere intertwined with evil. Good rarely exists simply in itself. And by the same token, evil rarely exists simply in itself. Rather, in society, in politics, in economics, in personal relationships, and in our own hearts, good and evil are intermingled. Things are hardly ever black and white, simply good guys and bad guys. Everything and everybody seems to be a mix of good and evil.

The parable of the mustard seed and of the yeast leaven in the flour is also quite apt for another of Fr. Jack’s wise words: “Real change takes time. And yet, precisely because it does, there is no time to lose.” Social change takes time and therefore there is no time to lose. In the parable of the mustard seed, Jesus teaches us that God wants good things to start small and to grow over time. God wants the best thing, his kingdom to start small and to flourish over time. God is patient with long processes because God rejoices in our cooperation. God delights in involving us, our freedom, our intelligence, our creativity. So he plants the seeds but he invites us to cultivate them. Things begin small and grow … and growth takes time.

Real change takes time and therefore there is no time to lose. So Fr Jack was earnest in conducting his feeding program at Payatas, improving nutrition, one child at a time. He was conscientious in managing his scholarship program also at Payatas, providing education, one scholar at a time. He was diligent in analyzing social issues from the lens of faith, one issue at a time. He was patient in finding feasible solutions to complex social problems, one problem, one solution at a time.

Lesson No. 2: Serving the poor is a non-negotiable requirement of discipleship.

Fr. Jack derived much life-nourishing energy and inspiration from his weekend apostolate in Payatas. He went to Payatas to celebrate masses in the chapels there. He fostered deep and lasting friendships with the parishioners. Fr. Jack certainly followed the counsel of Master Ignatius who said, “Friendship with the poor makes us friends of the eternal King.”

Jesus, our Eternal King, made clear the idea that God favored the poor and emphasized the notion that God is in the poor, that we meet God in the poor, and that how we treat the poor is how we treat him. Jesus’ invitation to his disciples is that they be both charitable and just. Jesus asks of us that we be generous of heart and give in charity to the poor. And he asks for more. Jesus also asks us to work at correcting all the social, political and economic structures that disadvantage the poor and help keep them poor. Charity seeks to give directly to the poor so as to help alleviate their poverty. Justice seeks to correct the structures that help create that poverty. And Jesus asks us to do both charity and justice.

Fr. Jack understood well this commandment of Christ and he did his best to follow it. Charity: he was a father to so many in Payatas whom he helped through feeding and scholarship programs. Justice: he was a dedicated analyst who worked at changing social structures that burdened the poor.

In his work for justice, he described himself as a priest-sociologist. And in his last book launched a few days before his death, he characterized this double occupation as a seeming oxymoron, “a seeming contradiction in terms of the day when sociologists were expected to be value-free.” He argues that while sociology as an empirical science tries to be ‘value-free’ and objective, “the sociologist is guided by his or her values in the choice of a subject for research, in procedures for data gathering, and often in the framework within which he/she interprets the data.” Fr Jack was unabashedly priest and sociologist. And there was no doubting the norm and source of his value premises. No other than the One who washed the feet of His disciples; the One who laid down His life for His friends.

Fr. Jack’s careful arguments about the population issue tried to wrestle honestly with the challenges of large family sizes of families struggling in poverty. And he made these arguments as a loyal son of the Church. So he was hurt when his writings were misunderstood as being unfaithful to the Church he loved. Moreover, he was a true son of Loyola in following the Ignatian precept that love is shown more in deeds than in words. He was assiduous in conducting a Natural Family Planning program in the chapel communities in Payatas. For him, it was not sufficient to be simply lobbying against coercive population control, it was necessary to be proactive in carrying out programs espoused by Church teaching.

The results of promoting justice are not easy to achieve. Frustrations and failures are part of the course. Dealing with obstacles and hindrances to meaningful social change is a constant struggle. In spite of all the hurdles, for Fr. Jack, the change agent will persevere if he or she has faith. Fr. Jack often ended his Easter columns with these words: “At the center of this universe there is a God who is love; that the mystery of goodness is more powerful than the mystery of evil that is so evident among us; that in the end, life will triumph over death, good over evil, love over hatred.”

The mustard seed will become a tree with room for everyone. The yeast will raise the dead flour to a life of bread for the feast. The relentless divine initiative will see the process through. No matter how small the beginning or how threatened the middle, the end is never in doubt. The kingdom will come and the will of God will be done.

Lesson No. 3: Always part as friends.

Helping Fr. Jack in administering ICSI we would sometimes need to let go of a staff member because a project had ended, or because of budget cuts or due to performance less than satisfactory or a staffer just wanted to move on. When we had to handle this sensitive matter of employment termination, he always reminded me that whatever happens it was always important to part as friends. It was essential that ICSI and the staff concerned parted as friends. That the friendship continues between Fr Jack and the staff who had to leave. ICSI is a small institute that depends on short-time projects and thus its staff turnover is quite fast. But it is a testament to Fr Jack’s kindness that almost all of the staffers who have left ICSI continue to value his friendship. They have kept in touch with Fr. Jack and Fr. Jack continued to follow their lives with keen interest and heart-felt concern.

Always part as friends. For many years, Fr. Jack was Chaplain of Arvisu House, the house of candidates to the Society of Jesus. Year in and year out, Fr. Jack always dreaded the day when the results of the candidates’ applications to the novitiate were announced. He said he always felt sad for those who were not accepted because in the course of living in community with them, he had gotten to know them well and had appreciated what was good and precious in each one of them. It was sad for him to part from candidates who had become friends.

I was told that during the last week of his life, confined at the Heart Center, he was asked what he wanted. He was asked what would give him some comfort and relief. His answer was: “I want to go home. I want to be with my brother Jesuits.” In moments of pain and diminishment, home for Fr. Jack was among his brothers, his friends in the Lord. Always part as friends.