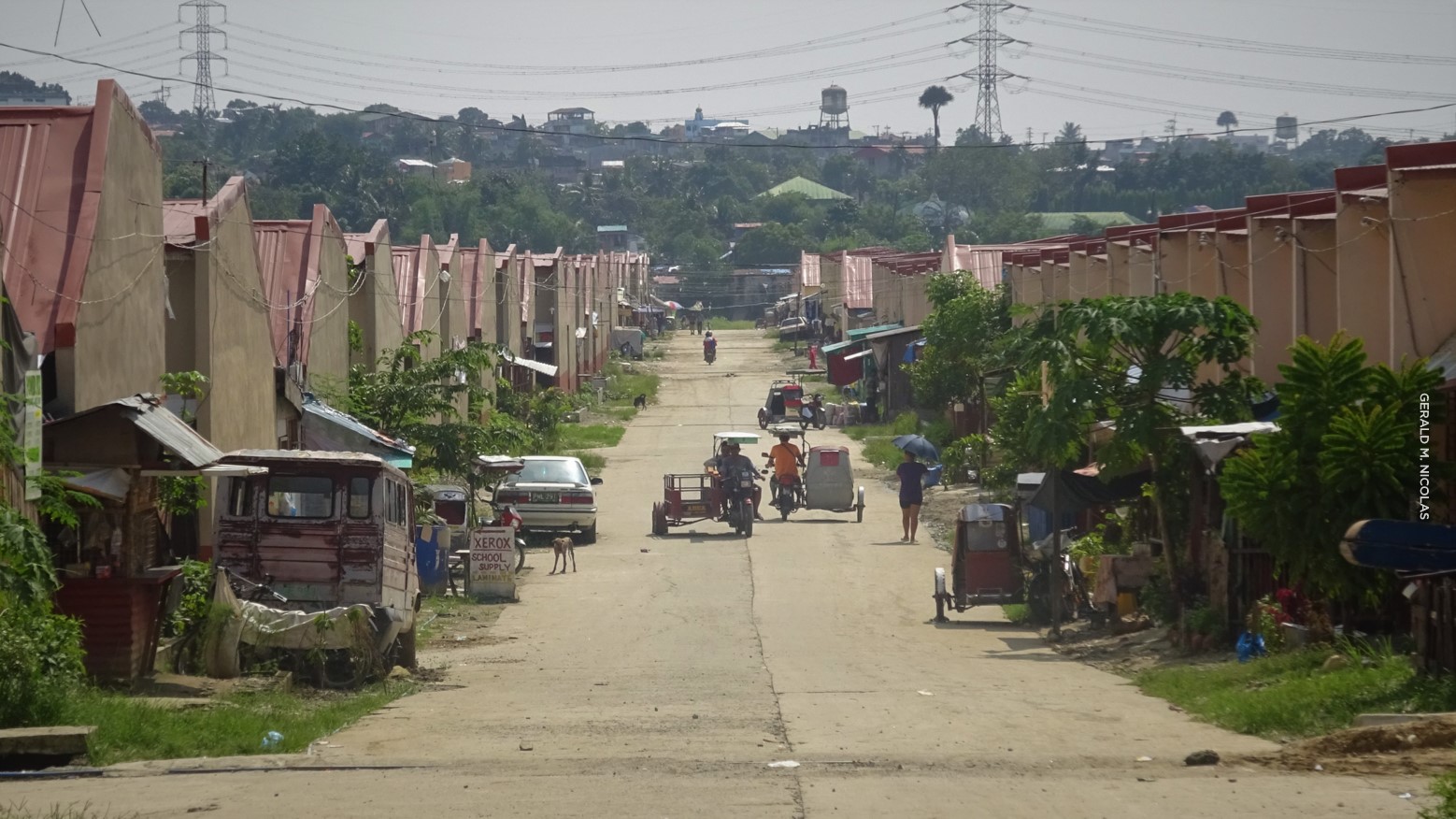 Eight years ago, almost 80 percent of Metro Manila went under water after Tropical Storm “Ondoy” unloaded a month’s volume of rain in just six hours. Almost two million people were affected by the widespread flooding that killed hundreds, rendered thousands of families homeless, and caused a leptospirosis outbreak. Believing that informal settlements occupying the easements of Metro Manila’s waterways prevented rain water from washing out to Manila Bay or Laguna Lake, the Arroyo administration was quick to order the relocation of families in these communities.

The measure was formalized four years later by the Aquino administration through Oplan Likas (Lumikas para Iwas Kalamidad at Sakit), a resettlement program that targeted around 100,000 informal-settler families living in danger and high-risk areas of Metro Manila. A P50-billion fund was allocated to build houses for these families. Those severely affected by Ondoy were prioritized. It is basically a housing program for the poor but, as the name suggests, it is also a measure to reduce the exposure of families to severe natural disasters often attributed to climate change. Oplan Likas is a climate change adaptation effort, one may say, and the current administration continues to implement it. But the emphasis on adaptation loses sight of the need for mitigation, the more long-term component of climate change response that focuses on reducing greenhouse gas emissions, in two plausible ways.

First, off-city resettlement contributes to urban sprawl. As of June, the National Housing Authority (NHA) has developed more than 80 new settlements in Bulacan, Cavite, Rizal, and Laguna. These projects, as well as other low-density residential developments in these provinces, covered thousands of hectares of agricultural land or green spaces with impervious and heat-absorbing concrete. The Inquirer ran a special report, “Many farms lost to land conversion” (3/1/17), with satellite images showing urban sprawl in Metro Manila as having doubled since 1988—from 424 to 702 square kilometers. Resettlement projects occupy a significant area of these converted lands. Aside from altering local weather patterns by enhancing urban heat island effect, built-up areas also reduce natural carbon sequestration. Runoff water from these resettlement sites, located in higher areas, could also inundate low-lying areas; much of the flood during Ondoy and in the following years came from the uplands where there is not much soil to soak up water.

Second, this sprawl has added population far from places of work and other services, forcing people to commute long distances and, in the process, add to increased carbon emissions. At least 50,000 families have been relocated in NHA projects, and thousands are expected to transfer when the housing units are completed. Assuming one member of the family works in Metro Manila, this means 50,000 people traveling in and out of the resettlement sites using energy-inefficient public transport such as buses, jeepneys and tricycles.

By contributing to a kind of urban expansion that fuels climate change, off-city resettlement — at least by the way the housing projects are designed and the locations the government selects—offsets any gain from climate change adaptation efforts. Worse, some resettlement sites were built without due diligence in examining environmental hazards in the area, placing people’s lives in danger. For example, houses in a resettlement site in Rodriguez, Rizal, were destroyed in August 2012 after rains brought by the southwest monsoon caused deadly flooding.

We are at a point when the haphazard growth of the Manila megalopolis cannot be reversed, but this should not discourage government, especially at the local level, from maximizing available spaces in cities to integrate the poor and keep carbon emissions at manageable levels at the same time. New transport strategies to reduce sprawl and the use of private cars must also be examined. Resettlement remains an option given the carrying capacity of our cities, but for it to be a sensible climate change adaptation strategy, it should not worsen the very problem it seeks to solve.