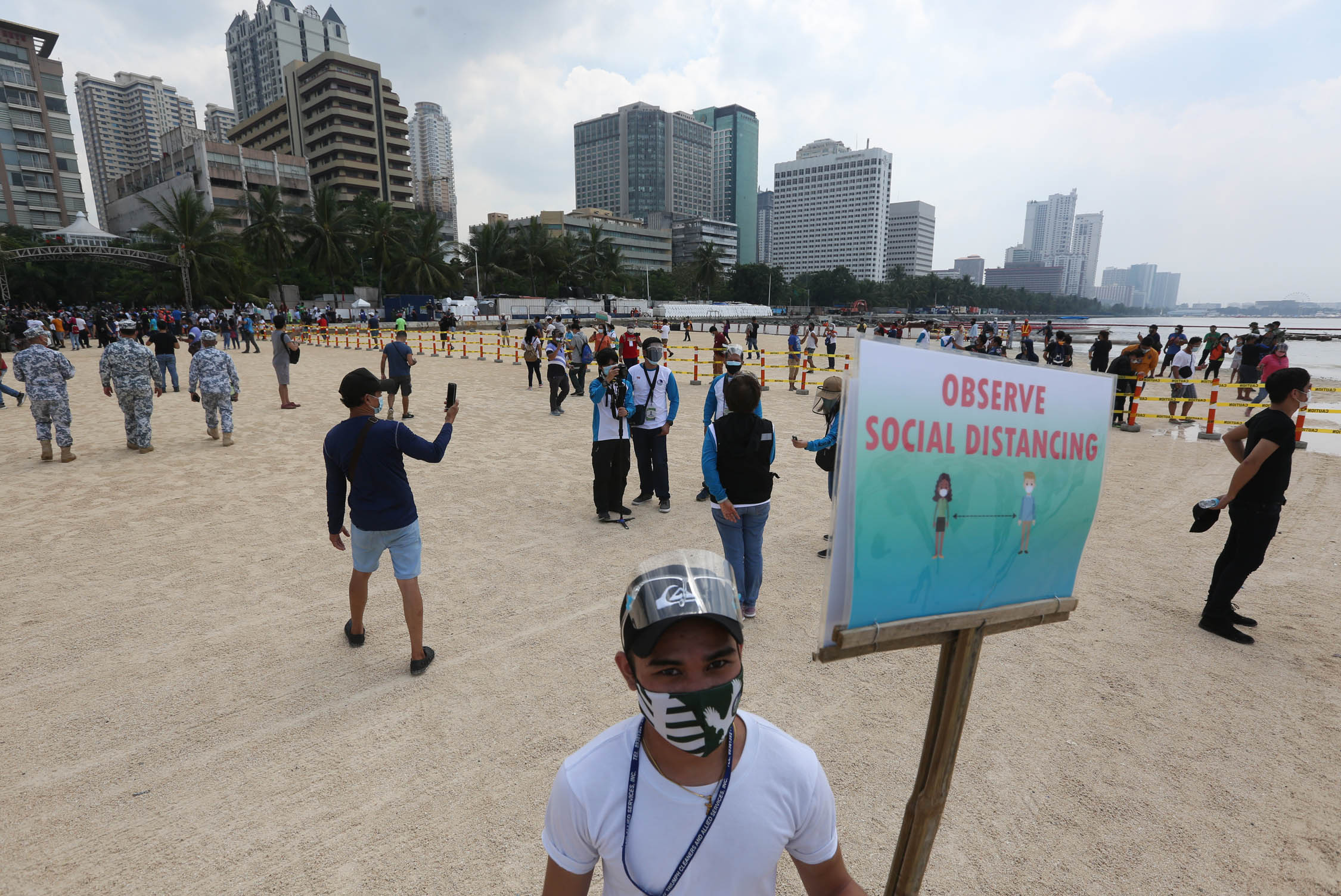 Who asked for a white sand beach in Manila Bay? Definitely not the 15,000 or so families languishing in poverty, hunger, and joblessness in Baseco, the biggest coastal informal settlement in Manila. Of course, the truckloads of crushed dolomite boulders that the Department of Environment and Natural Resources (DENR) allowed to be extracted from Cebu were not dumped near their community which is also along the bay, but in front of the 500-meter long seaside sunset viewing spot along Roxas Boulevard.

The disbelief among environmental advocates, marine ecology experts, and fisherfolk leaders upon learning about what one of them called a “completely absurd” government project was to be expected. The DENR admitted that the “white sand” will not help improve the water quality of Manila Bay (which should be the point of rehabilitation), which makes the real objective of filling a portion of the baywalk puzzling.

Our fellow citizens in Baseco are asking from the government the same essential things needed by the 7 million workers who lost their jobs and the 5 million Filipinos who experienced involuntary hunger the past few months because of community lockdowns. Daily wage workers appeal for government help as they can’t have jobs done from home. The meager “ayuda” that families received has long dried up. Cases of COVID-19 in Baseco are said to be on the rise, yet many are suffering from other illnesses due to poor access to water and sanitation. Unfortunately, not a bucket of white sand can provide cash or food to a family in Baseco.

Residents of the place have more specific, long-term demands. For more than two decades, they have been asking government for more secure land tenure that will give them freedom from threats of eviction and demolition. In 2002, then President Gloria Macapagal Arroyo declared Baseco a socialized housing site. As with many presidential land proclamations, the implementing guidelines that would facilitate the granting of plots to qualified beneficiaries have not been issued, yet government has continued to “develop” the area by reclaiming it with soil, debris, and trash. The expanded Baseco is now home to thousands of families, their members making up the city’s workforce. Over time, those who have the means were able to build sturdier houses and add floors, but many are still living in makeshift structures. Gawad Kalinga and Habitat for Humanity have built housing projects, but beneficiaries were not granted land titles in the absence of a legal basis.

Fully aware that Baseco is a poorly reclaimed area that might sink due to liquefaction or get ravaged by tsunami if a major earthquake hits close by, community organizations have been urging the government to reinforce and stabilize the landfill and help them improve their housing structures. They know that land reclamation as massive as Baseco is harmful to the environment, but under present conditions, relocating thousands of families to other places will be a lot costlier if provisions for basic and social services are accounted for. Some have prepared “people’s plans” in a collective effort to make their community livable. All they ask from government is support for their community plans in the form of “engineering interventions.”

The DENR said engineering interventions will be in place to prevent the artificial white sand from getting washed away by storms and high tide. The cost of these interventions will be on top of the P349 million that went into what the DENR calls a “beach nourishment” project. But if the government can spend for the upkeep and protection of pulverized rocks, shouldn’t it shift its gaze to the far more serious needs of people striving hard to improve their lives? Shouldn’t it nourish people instead?