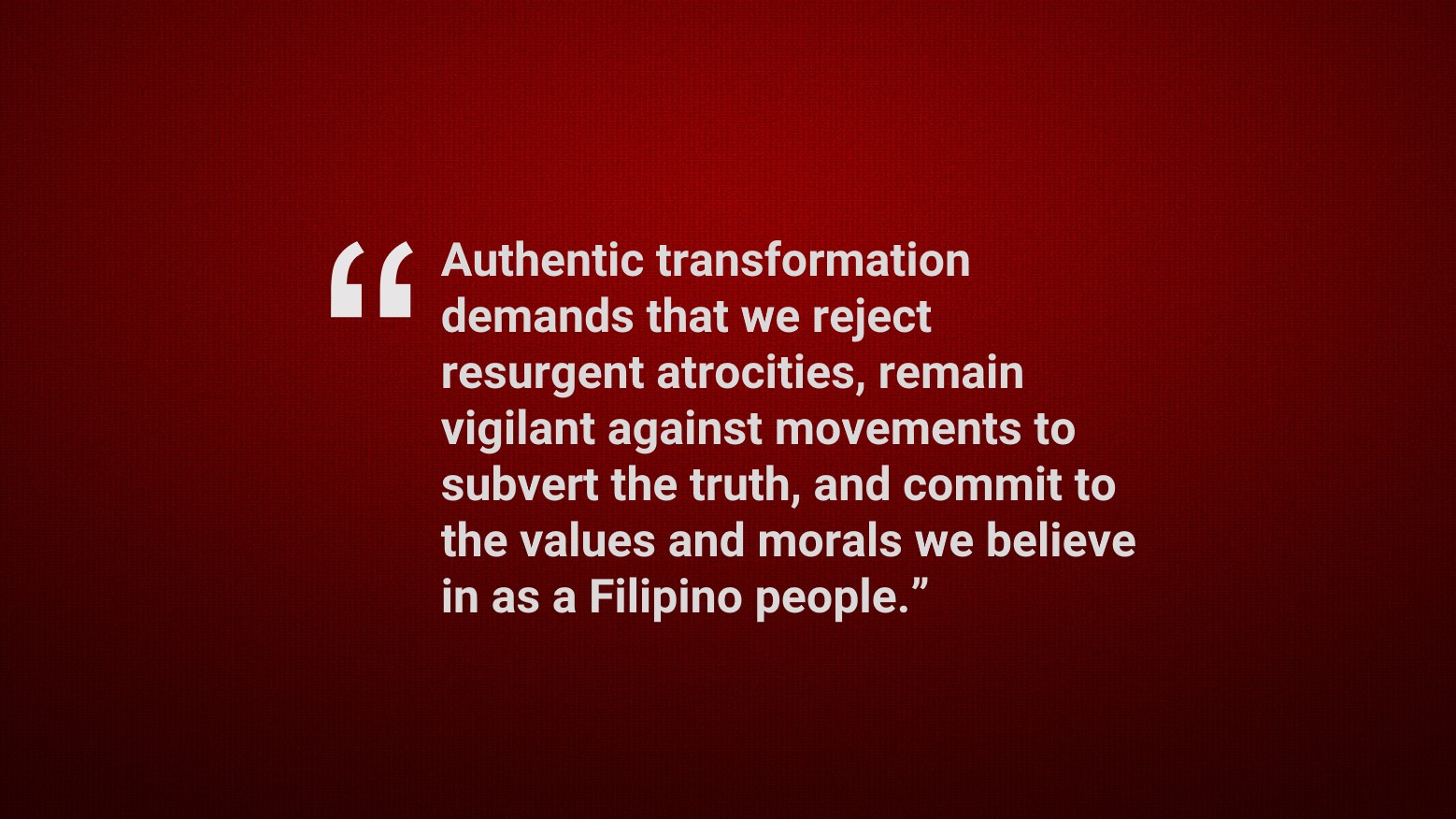 On November 18, 2016, the dictator Ferdinand Marcos Sr. was buried at the Libingan ng mga Bayani (LNMB). On this tragic day, people spontaneously expressed dissent, outrage and indignation at this betrayal of our beloved country by going out into the streets.

We went out because we had not forgotten. We remember those who wallowed in poverty while the dictator’s family flaunted their caches of jewelry, gowns, shoes and gold. We also remember those whose human rights were abused and whose dignity had been trampled. We still remember these clearly. For such reasons, we stand firm in our belief that Marcos was a dictator unworthy of being buried at the Libingan ng mga Bayani.

There are those who believe that the burial of the dictator at LNMB should lead to closure—to forgiveness, healing, and moving on. But for many who took to the streets then and now, forgiveness and healing demand justice! Yet, justice remains elusive. Reparations have not been voluntarily made, most of the stolen wealth had not yet been returned, and human rights violators have not been held accountable. Amidst all these, those who were involved managed to perpetuate themselves in power, still unrepentant and unapologetic.

In the last year alone, we witnessed brazen attempts to subvert truth and revise history, through art commissioned to propagate the myth of the dictator’s glorious achievements, stamps that commemorate the dictator’s presidency, celebrations of the 100th anniversary of the dictator’s birth in the hallowed grounds of LNMB. These lead us to believe that what is being asked of us is not genuine healing, but merely forgetting.

We believe that healing starts with acknowledging the pains and remembering what should never be allowed to be repeated. Because of this, we are of the conviction that we must strive to remember and to remain vigilant as ever.

In the last year and a half, dangers of authoritarianism and tyranny continue to  cast their shadows in our society: progressive attacks on democratic institutions and on democratic checks and balances, a massive propaganda machinery that seems to be directed towards silencing dissent and opposition, the continuing violation of human rights that soak our streets with the blood of victims of anti-drugs operations, and a well-engineered clamor for a revolutionary government that would give the president dictatorial power.

As followers of Christ, we are bound by our commitment to promote faith that does justice. This commitment compels us never to allow the structures of oppression to prevail, and to be in solidarity with those violated, broken, and forgotten. This compels us to call to account those who in the past had participated in the violation of human life and contributed in the corruption of our institutions and continue to subvert justice and the rule of law.

Each day that we do not try to pursue justice represents a step towards impunity and away from the genuine healing of our land.  Authentic transformation demands that we reject resurgent atrocities, remain vigilant against movements to subvert the truth, and commit to the values and morals we believe in as a Filipino people.

We beg for the grace of a discerning heart— pursuing for what is better according to God’s will.

We beg for the grace to be steadfast—the unwavering faith to pursue justice, peace, love, and solidarity towards building the Lord’s kingdom on earth.

We beg for the grace of courage—to act on our convictions and the fruits of our discernment, to break from the paralysis of fear and apathy, to dissent against what is contrary to the will of the Father, to dismantle and correct historical and current injustices.

As communities of Christ whose faith continually demands and pushes us to seek for greater justice, we continue to look to our Lord, our source of eternal hope, strength, and guidance.