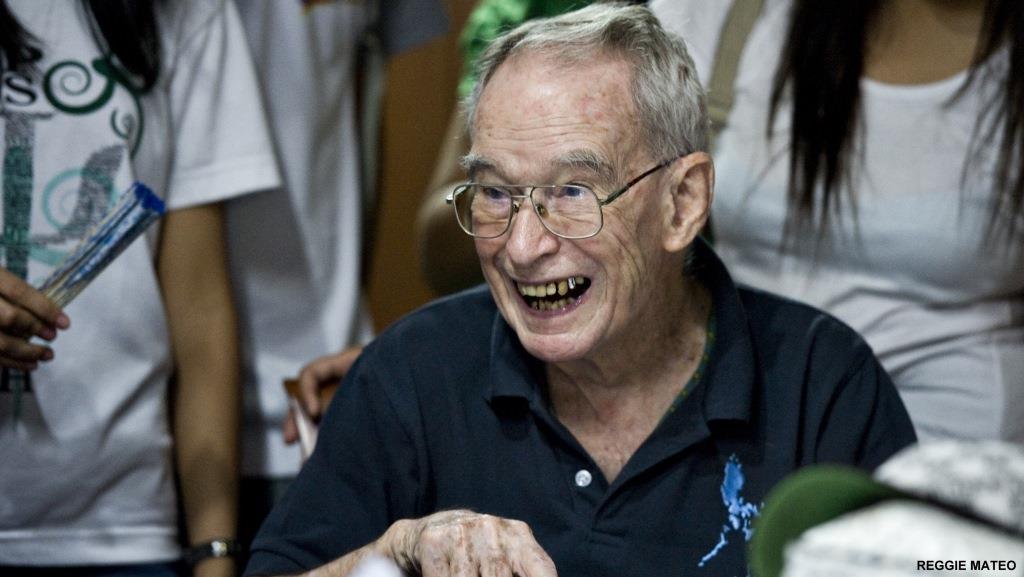 A voice of hope

I was a great fan of Fr Jack Carroll even before I first met him. I was already reading his articles and publications in the late 70s and early 80s before I entered the Society in 1983. He took to heart the “faith that does justice” mandate of the 32nd General Congregation. I was inspired by his writings and looking back, perhaps, these added to my enthusiasm to take up Sociology in college.

For many years in this Province until recently, he was the only fulltime Jesuit in the social apostolate while other Jesuits were doing it part time. He always lamented this fact. He realized though that many Jesuit ministries have taken on board the social dimension thrust of the Society. Recently, he wrote me a letter asking for a Jesuit to work fulltime in social research and ministry, particularly in John J Carroll Institute on Church and Social Issues (JJC ICSI), but I had to decline politely his request. He appreciated my reasons. I hope though he will not appear to me tonight to remind me about his request. He mentored many lay people (like Nono Alfonso, before he entered the Society) and several of us Jesuits (Pedro Walpole, Jojo Magadia, Bobby Yap, Jun Viray, myself and down the line Robert Rivera and Rene Tacastacas). He had hoped that we would stick it out in the social ministry, but one after another we started to take on administrative work or other tasks.

First, his passion for social research and intellectual rigor. Work for justice and development cannot be done simply by a great desire for social transformation. Sincerity, while necessary, was never enough for him. His course “Stability and Change in the Third World” was probably the best social science course I’ve ever taken, even better than the courses I had in my postgraduate studies abroad. It was very interactive. We had no lectures, no quizzes but a lengthy paper was required. Everyone had to read, prepare a short paper before class, participate in the discussion and at the end of the class, he summarized our discussion points and showed us that there were no easy answers to social problems.

During the days of the dictatorship, he saw that the Church and Philippine society needed a research institute that would provide ideas and reflections to inform collective action.Thus, he, along with Fr. Ben Nebres and the late Bishop Cisco Claver founded the Institute on Church and Social Issues (ICSI) in 1984. Fr. Jack liked to tell the story that, in haste, when the Marcoses fled the country, an article on possible political scenarios crafted by some including himself and other ICSI personalities was found in the Presidential Palace suggesting that either the President or his First Lady, or perhaps both of them may have read it.

Last Monday, apart from the launching of his second book, we celebrated the 30th anniversary of the founding of JJC ICSI. He really wanted to be around for this event. His doctor initially was confident that he could be back from the hospital by then. He did come back exactly on 14 July, the day of the book launch, but he was brought directly to the Lucas Infirmary and was visibly missed during the entire event.

This brings me to my second point: his love for the poor and the excluded. It was not just simply a commitment and an option for the poor, but above all a deep love for the poor. Since 1983, he spent his Sunday ministries being with the poor in Payatas until his health was failing him. The feeding program in Pansol which he initiated started in 2008. He struggled with his Tagalog to be able to speak with the masa. He was not afraid to commit mistakes. Irreverent Jesuits amongst us would recall how he said “laláki ang inyong gantimpala” instead of “lalakí ang inyong gantimpala.” Still, he persisted in learning his Tagalog.

Thanks to ICSI which he led for 15 years and to other players, the Urban Development and Housing Act (UDHA) was passed in 1982. I personally witnessed the jubilation of urban poor leaders and NGO development advocates when pro-urban poor UDHA became a law. He initiated a scholarship program for the financially challenged youth. He became a strong advocate of women’s rights and welfare of the family through the Natural Family Planning (NFP) program since 2003. The NFP program is still flourishing. As Chair of the Board of the Institute of Social Order from 1997 until last year, he also looked after the welfare of this institute.

Fr. Jack was critical of anything that exploited the poor and the excluded. He did not mince words when he had to take a stance even when it was not popular in Church circles or even within the Society – when it meant we were losing contact with the poor and not taking our faith-justice thrust seriously. Our response to the psalm today is “Do not forget the poor, O Lord.” This probably would have been Fr. Jack’s fervent prayer.

Third, his love for Christ and his Church. Fr. Jack was not just an intellectual, an advocate of the poor, but deep down inside, he was a profoundly spiritual person who had an immense love for Christ and his Church. He followed the poor Christ, and he himself was poor and lived simply. He loved the suffering Christ and so he had an eye for those who suffered due to oppression and exclusion. Often, he would be seen praying his Breviary. (The Breviary (aka Liturgy of the Hours) is the official prayer of the Church which ordained ministers are to recite everyday). He would not feel agitated if you disrupted his prayer because he always made himself available to people in need.

He was a great advocate of the Basic Ecclesial Communities (BEC) long before PCP II in 1991 canonized BECs as the way forward for the Church in the Philippines. He was a keen observer of church leadership. He analyzed the statements of the Bishops. He was deeply involved in issues around the role of the Church in democratization, reproductive health, agrarian reform and urban poor. He was often critical of people who took extreme positions.

The death of Fr. Jack marks the end of an era of Jesuit giants following the intellectual tradition set by social scientists such as Frs. John Doherty, Mike Phelan, Frank Lynch and Frank Madigan. In his response to my annual Ex Officio letter, Fr. General noted: “The generation of Jesuit intellectuals whose reflection and writing influenced the Philippine society and Church is passing, and it is troubling to see very few Filipino Jesuits engaged in this ministry of research today. I think that, if the Society truly wants to help the local churches, it is not primarily or solely building up good relationships that is necessary. If we have no help to offer the Church, the relationships become empty.” Fr Jack’s ideas and reflections were greatly appreciated by Bishops, priests, religious and lay people, even if they can be disturbing. It was his humble way of loving the Church.

In today’s Gospel, Jesus quotes the prophet Isaiah: “Behold, my servant whom I have chosen, my beloved in whom I delight; I shall place my Spirit upon him and he will proclaim justice to the Gentiles…. And in his name the Gentiles will hope.” Fr. Jack certainly proclaimed justice in our troubled world, a justice that stems from a deep faith. Despite how gloomy the situation is, he certainly was a voice of hope, for the poor and the excluded.

Thank you so much, Fr Jack. May God be with you. Please pray for us.